Bridge United A 1-0 Shannon Olympic A
A goal from Noel Collins was enough to secure the victory for Bridge Utd and close the gap on leaders Newmarket Celtic to 4 points at the top of the premier division.

Corofin Harps A 2-1 Ennis Town A
Goals from Jason O’Connor and Shane Constable gave Corofin Harps a deserved victory over Ennis Town at Corofin on Sunday. Constable scored his 15th goal of the season and is in a rich vein of scoring form at the moment. The game also had 3 red cards with Darryl Eade from Ennis Town and the Corofin pair of Brian Halpin and Steven Keane getting early showers.

Tulla Utd A 2-0 Hermitage A
Tulla took all 3 points from Sunday’s clash at the Cragg and had to do it the hard way after key defender Daragh Corry was sent off for getting a second yellow card 10 mins before half time. Tulla regrouped at half time and even with 10 men really took control of the game in the second half and created some very clearcut chances but failed to finish them. As often happens, Tulla’s opening goal came about following a poor defensive header. When Johnny O’Brien latched onto the ball, he showed good control and rifled the ball home with his right foot to beat the Tage keeper on his near post. Brazilian striker Sebastiao da Silva continued his good run of form by scoring Tulla’s second despite the attentions of 2 Hermitage defenders. It was a good team performance with Shane Collins making an excellent save late in the first half. The back 5 kept another clean sheet and despite being down to 10 men for 55 mins, Tulla had far too much power at midfield whilst up front da Silva caused problems for the Hermitage defenders every time he got on the ball. 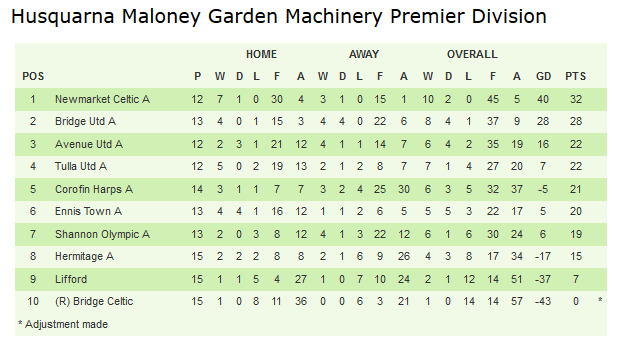 Connolly Celtic 2-4 Kikishen Celtic
Connolly Celtic dominated the first half in terms of possession and chances and took the lead when they were awarded a penalty. This seemed to wake Kilkishen up and equalized soon after when Paul Murphy volleyed home after great work from Meghan Pewter down the wing. Connolly went in at half time with the lead when their striker scored a cracker from 25 yards on the stroke of half time. Kilkishen came out in the second half all guns blazing and soon equalized through Eoghan Pewter and then took the lead when Pewter got his second of the day. Kilkishen wrapped up the points when Pewter completed his second hat-trick in 3 games after a great ball from Noel Nash set him up.

Sporting Ennistymon 1-0 Mountshannon Celtic
A solitary strike in Lahinch in this First Division encounter handed Sporting Ennistymon three important points. The hosts began the fixture showing superior verve and purpose. However Mountshannon’s John Scanlan fired a warning to the hosts as he launched a rasping effort against Ennistymon’s crossbar. The decisive moment of this fixture came midway through the opening period. The ball was received on the corner of the visitor’s box before being shifted and curled high into the opposite corner. The second period offered little in the way of goalmouth action at either end. The hosts threatened to a greater extent but failed to test Colm Kavanagh in the Mountshannon goal. The visitors were left to rue their inability to forge more meaningful opportunities as Ennistymon dictated proceedings to the end.

Kilrush Rangers 1-1 Rineanna Rovers
In this top of the table clash in the second division Rineanna went in front in the first half through Paul Butler and it remained 1-0 to the visitors at the break. Kilrush got a deserved equaliser in the second half through Gearoid O’Brien to earn a share of the points on the day.

Bunratty Cratloe 2-1 Rhine Rovers
Bunratty Cratloe kept alive their survival hopes with victory over Rhine Rovers at Bunratty on Sunday. Bunratty Cratloe went in front with a goal from Philip Counihan. Rhine getting battling and drew level. Brian Phelan scored the all important winning goal on 85 minutes after getting on the end of a long throw from Colm Ryan.

Inch Crusaders 3-2 West Clare FC
Inch Crusaders turned in another impressive performance to defeat league leaders West Clare FC at Lees Road on Sunday. West Clare went in front on 15 minutes with a deflected shot. Inch hit the crossbar twice from Sean Hehir corners in the first half as it remained 1-0 to West Clare at the break. Inch deservedly got back on level terms on 70 minutes when Eamonn Bracken played a good through ball to Thiago Santana who turned well on the edge of the box and riffled an unstoppable shot to the back of the West Clare net. Inch went in front on 80 minutes when they were awarded an indirect free kick on the edge of the West Clare box. Hehir teed up Santana who scored his second with a sweet volley over the wall into the top corner giving the West Clare keeper no chance. The drama was not over yet and back came West Clare on 85 minutes to equalise with a well struck header from a free kick into the box. Inch were not be denied and kept pressing to the end. A shot from James Rynne on 90 minutes was deflected out for a corner. Sean Hehir who had come close twice in the first half from corners made it third time lucky when his well delivered kick went all the way to the back of the West Clare net to give Inch the victory and the three points.

Bridge United B 2-1 Coole FC
Goals from Adrian Whyte and Trevor Maxwell helped Bridge Utd to victory over Coole FC at Sixmilebridge on Sunday and keeps alive their challenge for the third division title.

Corofin Harps B 2-1 Tulla Utd B
Corofin Harps B got back to winning ways with a 2-1 win over Tulla Utd B at Corofin on Sunday and are still in contention for the title. A goal from a free kick just outside the Tulla box from captain Dean Lee was his 6th of the campaign gave Harps the lead but Tulla equalized before the break. Then the winner came on the 73rd minute from that man again Shane Constable who followed up his winning goal for the A team in the morning with the winner for the B team in the afternoon to secure the three points for the Harps. 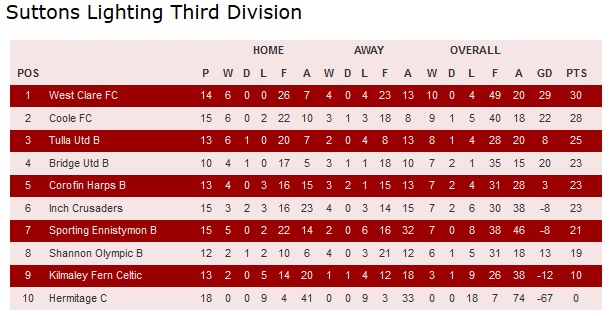