A man has been airlifted to hospital after he was seriously injured in a workplace accident in Co Clare.

The alarm was raised at around 1.30pm when staff at Randaddy’s on the beach front called the emergency services.

Two units of the fire brigade from nearby Ennistymon along with the local ambulance rushed to the scene.

A rapid response advanced paramedic unit from Ennis was also sent to the incident while the Shannon based search and rescue helicopter was alerted.

Fire brigade personnel had to use cutting equipment to free the man from the machine. It’s understood that the casualty’s arm was broken in several places while he also suffered tissue damage.

His arm is also believed to have been still entangled in part of the machine when he was taken from the scene.

Ambulance paramedics administered pain relief and stabilised the injured man before he was handed over to the helicopter crew.

Members of the Doolin unit of the Irish Coast Guard cleared a landing site on the beach for the helicopter while personnel also laid down a canister or orange smoke to mark the landing zone and provided the helicopter crew with an indication of the wind direction at the scene.

One woman said: “I had just come back from surfing and there were fire trucks, ambulances and guards outside Seaworld. I was one person from the Coast Guard and then a few more arrived. Before I knew it the helicopter was flying past and then landed on the beach.”

“They brought a man out on one stretcher and transferred him over to another one before the fire brigade lads and paramedics carried him down to the helicopter. The helicopter was gone in seconds,” she said.

One emergency worked said: “This was a great example of an inter-agency response and cooperation. Ennistymon Fire Service, the Coast Guard and National Ambulance Service (NAS) exceptionally well together and of course the crew of Rescue 1-1-5 from Shannon.” 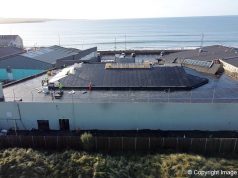 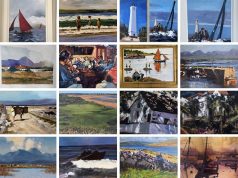