‘None The Wiser’ is Wood’s fourth solo album and was released in Summer 2013 from Chris Wood. He has worked and collaborated with a long list of artists, most recently Dizraeli, Billy Bragg, Eliza and Martin Carthy in Simon Emerson’s Imagined Village. His duet with Eliza added to the “Villager’s” winning another Folk Award for “Best Traditional Song”.

The Irish Times dubbed him ‘the renaissance man of English folk’ because his work extends beyond song writing into commissions for Radio 3 Between The Ears, Late Junction and The Essay. He has written for The Times and lectured at Newcastle and Limerick Universities. His setting of Blake’s Jerusalem features in Paul Gilroy’s lecture on poetry and music at Kings College London and Wood’s lyric Walk This World With Music is included in Michael Morpurgo’s latest collection.

Woods will continue to tour ‘None the Wiser’ solo during 2015 bringing his spellbinding performances to new audiences in UK and Europe as well as playing some high profile festival concerts. 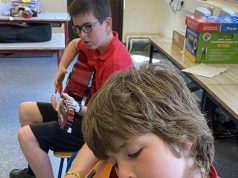 “Sounds of the Playground” – A lockdown guitar project