Representing St Caimin’s Community School in Shannon, the brothers received a walkover from Col Mhuire Johnstown, Kilkenny in the semi-final. They had a comfortable 15-4 15-2 final victory over Mark Rice and Michael Kelly of St Colman’s Claremorris in the final.

Conor Downes and Fionn Slattery representing Scariff Community College came up short to talented Omagh duo Lorcan McBride and Antoine Fox in the Junior Doubles Final. It finished 7-15 3-15 in their tie. In their semi-final they overcame the challenge of Kyle Dunne and Billy O’Neill 15-14 15-5.

Mark Rodgers of Scariff came so close to reaching the Junior Singles Final but he was edged out by eventual winner Jack Thompson of Thomastown, Kilkenny after a tiebreak. It finished up 15-3 5-15 12-15 in their semi-final battle.

In the Junior Girls Doubles, Tulla pair Aoife Floyd and Niamh O’Brien were defeated by Leixlip’s Leah Doyle and Molly Dagg on a scoreline of 2-15 5-15. 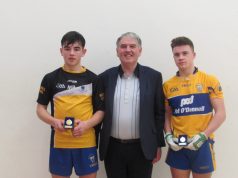