The GAA/GPA All-Stars sponsored by Opel, has confirmed Clare’s Conor McGrath among the shortlisted nominees for the first Player of the Month awards of the 2016 season, in hurling.

The Cratloe hurler is named alongside Waterford’s Shane Bennett and Austin Gleeson.

The winnersof the GAA/GPA Opel Player of the Month Awards for April will be chosen by the inter-county playing body, and will be announced ahead of the presentation in Croke Park on Wednesday 18th May. 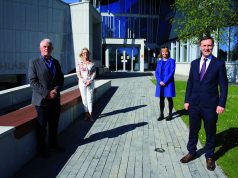