One man is being questioned by Gardaí following a drugs seizure in East Clare last night.

Gardaí seized drugs with an estimated street value in excess of €36,000 during an intelligence led operation targeting the sale and supply of controlled drugs in late on Friday night.

At approximately 11pm last night, Gardaí executed a search warrant at a premises in Clonlara.

During the course of the search, a quantity of ketamine, MDMA, cannabis, cannabis plants, DMT and cannabis jellies were seized (subject to analysis) with an estimated street value of €36,000. Approximately €4,000 in cash, a taser and mobile phones were also seized along with drug paraphernalia.

One man, in his 20s, was arrested during the course of the search and is currently detained under Section 2 of the Criminal Justice (Drug Trafficking) Act, 1996 in Henry Street Garda Station. 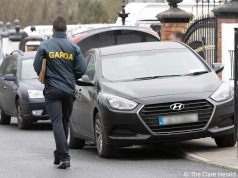