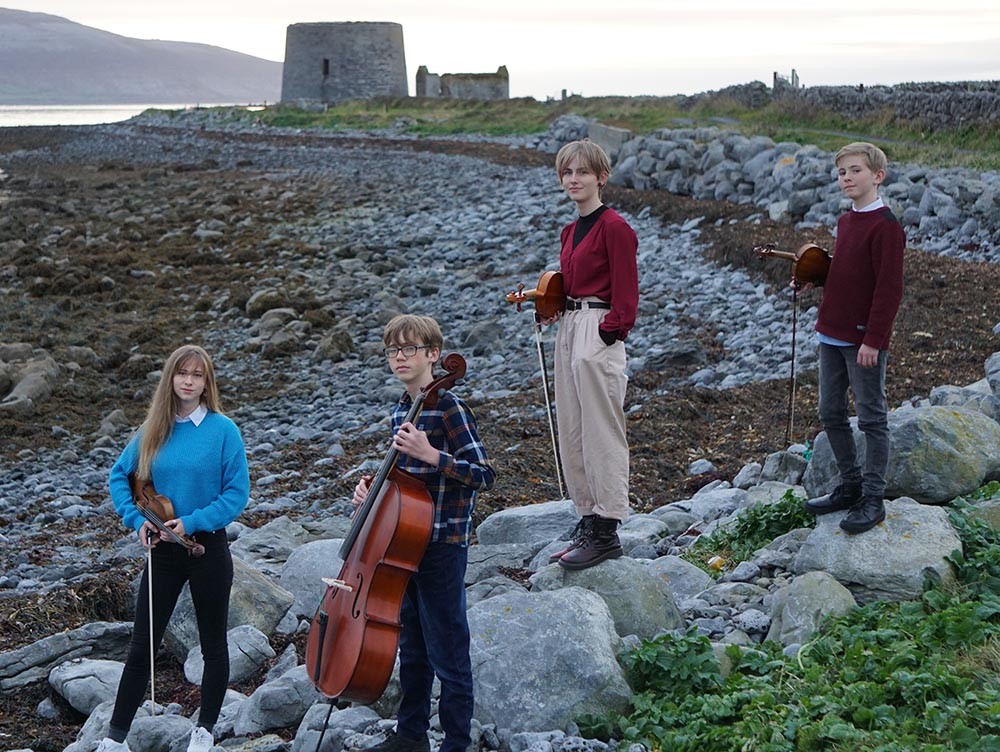 Shónagh the eldest of the four siblings who just turned nineteen this month played the lead violin and sang, while Mia who celebrated her seventeenth birthday this week played the viola and sang backing vocals. Euan (14), played on the cello while the youngest of the family, Noah (10), played violin. They combined their music with dance moves and vocals into a well-polished act.

From the seven acts, two acts were eventually selected by the judges to go to a ‘sing off’, they being the Farrells’ and the Temple sisters from Kilkenny. When the judges finally announced that the Farrell family were the winners there was shock and joy as they realised that they would go through to the next round -the Finals.

The four siblings are all students of Coole Music which is based in Gort and have used the lockdown to practice more together. They recently drew great attention for their performance on the virtual challenge campaign called Carpe Diem Sing and Play with their rendition of a-ha’s ‘Take on Me’. Their home video was posted two weeks ago and has notched up over thirteen and a half thousand views as well drawing attention from an American-Irish online radio station who called to conduct an interview for its listeners around Michigan.  The young quartet is usually known as ‘Burren con Brio’ which means ‘Burren with Spirit’.

Shónagh is a first year student of Music and French at UCD and is a recipient of An Award of Excellence from the Eimear Noonan Music Bursary scheme which is in turn funded by Carpe Diem fundraisers, the most recent being Carpe Diem Sing and Play 2020. She also is a member of Symphonic Waves and a past member of Coole Music’s Youth Orchestra and Sonic Strings. Katharina Baker, Director of Coole Music is also the Director of the Youth Orchestra and Sonic Strings which is composed of a number of members from the youth Orchestra.

Sonic Strings like to move and dance as they perform and this ‘dance like movement’ inspired Burren Con Brio to use a similar style in their own act for Réalta agus Gaolta. Shónagh wrote parts for her younger siblings by listening to Coldplay and other classical performers and cut it down to the required time which was in itself an achievement! Mia and Euan are students at their local secondary school just over the Clare-Galway border in Seamount College, Kinvara, Co. Galway.

Noah is in New Quay National School -a two teacher school just up the road from the beautiful Flaggy Shore where even Seamus Heaney stopped to write about.