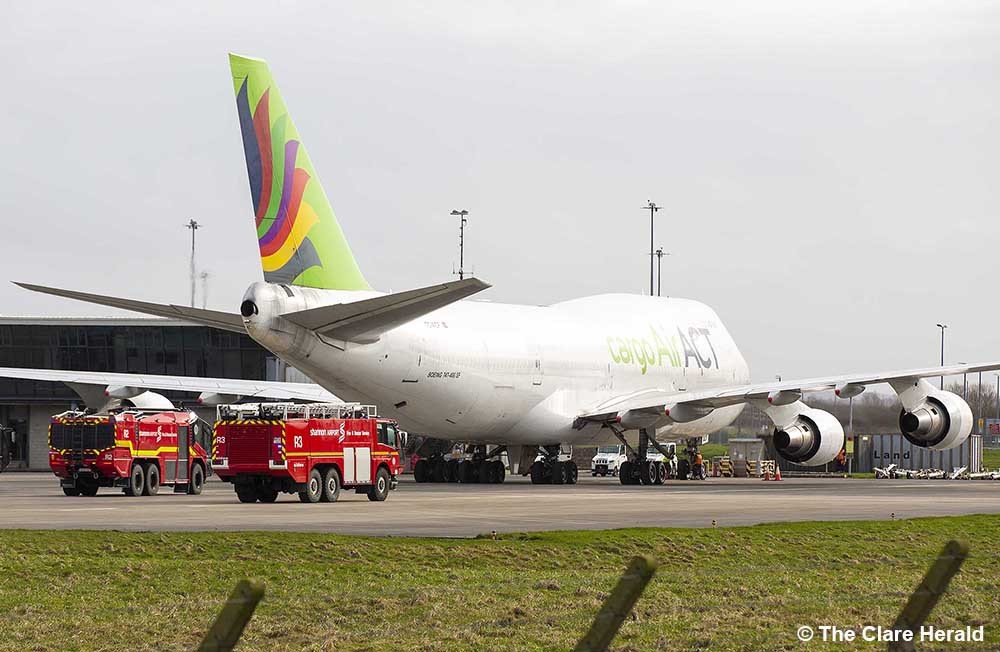 A U.S. bound cargo jet was forced to return to Shannon Airport this afternoon after suffering an engine issue on departure.

The Air ACT Cargo flight took off from Shannon shortly before 1.00pm and was destined for Chicago having arrived earlier from Istanbul in Turkey for a refuelling stop. The flight was operating on behalf of Turkish Airlines Cargo and was not carrying any hazardous material.

Soon after take-off, the crew of flight THY-6551 informed air traffic controllers that they had ‘engine problems’ and wished to level off. The crew reported that one of the jet’s four engines had ‘stalled’ on departure.

The Boeing 747-481 cargo jet, with 5 crew on board, levelled off at 3,000 feet for a time while the pilots investigated the issue. A short time later the crew confirmed to controllers they wished to return to the airfield.

The crew began routing inland for a time before turning around and flying out over the Atlantic where they dumped aviation fuel to ensure they touched down within safe landing weight limits.

While airport fire crews were placed on standby at Shannon, the Irish Coast Guard was also alerted to the incident and requested the volunteer crew of the Kilrush RNLI lifeboat to stand by at their station.

After spending around 90 minutes dumping fuel the crew confirmed they were ready to proceed back to Shannon.

The flight landed safely at 2.48pm and was met on arrival by airport fire and rescue crews. Engineers are now expected to investigate the cause of the engine issue.

THY6551 TC-ACF B747-400(SF) returned to Shannon this afternoon after suffering a compressor stall on departure, necessitating a reduction of thrust to idle in one engine. One hour fuel dump followed by an uneventful return. Full turnout by @ShannonAirport Police & Fire Service pic.twitter.com/dhAcrNc4fw