An executive jet carried out a low-level fly past over the runway at Shannon Airport this afternoon so ground crews could check whether there was an issue with the aircraft’s landing gear.

The crew had opted to divert to Shannon after reporting an issue with their aircraft shortly after taking off from Knock Airport in Mayo.

The Cessna 680 Citation took off from Ireland West Airport at around 10.50am bound for Keflavík Airport in Iceland. It’s understood there were 3 people on board.

While the flight was climbing north over Co Donegal, shortly before entering Scottish airspace, the crew advised air traffic controllers they had a possible issue with the left side landing gear which they believed may not have retracted.

The crew continued for a time and levelled off at 19,000 feet before turning around over the Donegal north coast. After troubleshooting the issue for a while, the crew opted to divert to Shannon Airport.

The crew did not declare an emergency and confirmed they were diverting to Shannon for ‘maintenance’. The crew also said that, at the time, they did not require emergency vehicles to be standing by. The crew did say however they would have to enter a ‘low-level hold’ to burn off fuel as they were over their recommended landing weight.

After spending some time holding over north county Limerick, the crew flew a low-level approach over the runway at Shannon where ground crews and air traffic controllers were standing by to carry out a visual inspection of the landing gear as the jet passed.

The crew said they wanted a visual inspection from the ground to ensure there was “no obstruction or anything abnormal looking with the left main landing gear.” The jet flew low over the runway with all landing gear extended and confirmed to controllers that all appeared normal.

Once it was confirmed that everything looked normal from the ground also, the crew repositioned to carry out a final approach to the airport. On the ground, airport fire and rescue crews had been placed on standby as a precaution.

As the aircraft approached the airport for landing, rescue vehicles were mobilised and took up positions at strategic locals alongside the runway and pursued the aircraft after it landed safely shortly after 12.30pm.

Fire crews also accompanied the aircraft to its parking position where engineers were standing by to investigate the issue.

One aircraft was placed in a holding a pattern for a short time while the incident aircraft landing however, operations at Shannon were otherwise unaffected. 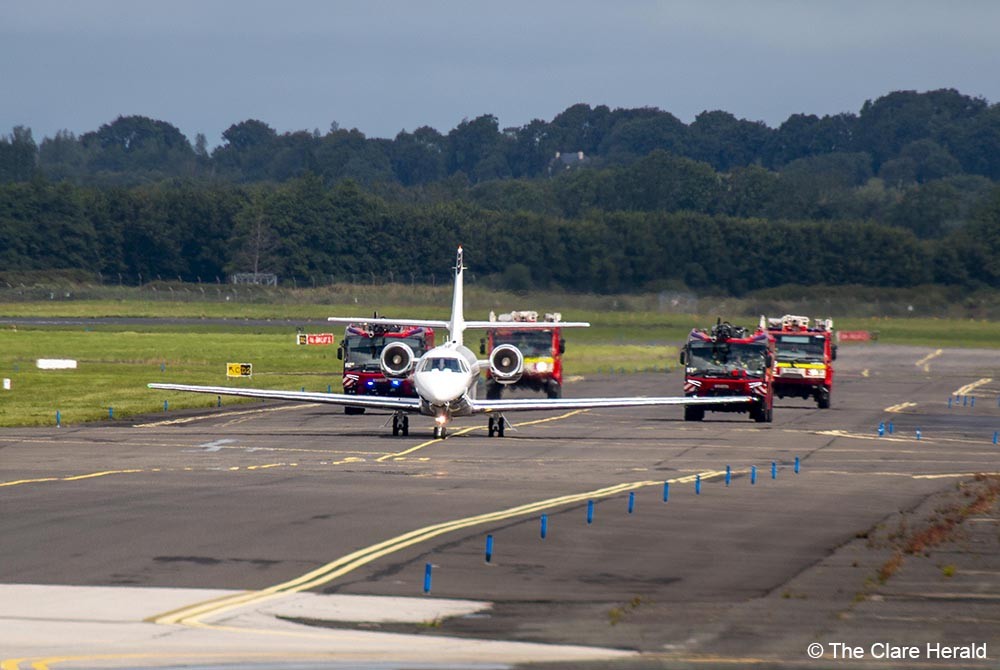