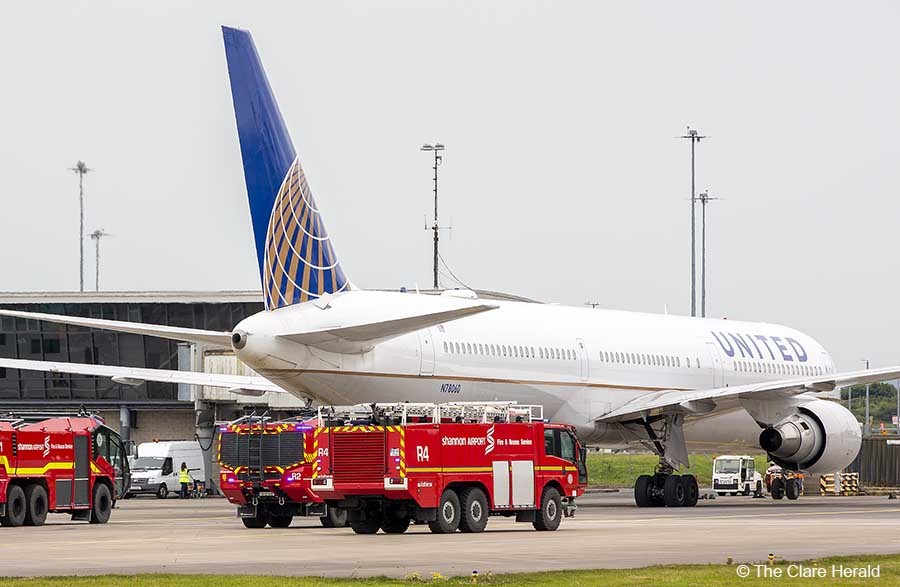 Passengers on board United Airlines flight 37, which diverted to Shannon Airport yesterday, will continue their journey this afternoon.

The flight, which was expected to continue to its destination yesterday afternoon, had to accommodated in hotels overnight after their flight was cancelled and their plane grounded.

A replacement aircraft has now arrived in Shannon to take the passengers onto Newark, New Jersey.

An airline spokesperson said: “After yesterday’s flight UA37 subsequently cancelled, customers were rebooked onto UA3049 which is scheduled to depart Shannon for New York/Newark today at 2:30pm.”

*The passengers continued their journey at 3.20pm today.

A transatlantic passenger jet has diverted to Shannon Airport this afternoon after the crew declared an emergency shortly after taking off from Edinburgh.

United Airlines flight UA-37 took off from the Scottish airport shortly after 11.00am and was about 75 kilometres north of Donegal when the crew levelled off at 25,000 feet and declared an emergency.

It’s understood the Boeing 767-400(ER) jet suffered pressurisation issues. The flight, with 252 passengers and crew on board, was bound for Newark, New Jersey in the US at the time.

The flight crew made a Mayday radio call and broadcast an emergency squawk signal on the plane’s transponder. The crew requested clearance to divert to Shannon Airport and was quickly cleared to do so. The flight rerouted to Shannon where emergency procedures were put in place on the ground.

That plan included alerting the local authority fire service, HSE and National Ambulance Service (NAS) and An Garda Síochána. Units of Clare County Fire and Rescue Service from Shannon and Ennis stations were requested to mobilise to the airport as support to Shannon’s own Airport Fire and Rescue Service. Ambulance crews and Gardaí were placed on standby at the airport fire station.

Airport and local authority fire crews were dispatched to holding points on taxiways adjacent to the runway ahead of the jet’s arrival. The flight landed safely at 12.05pm and was quickly pursued along the runway emergency vehicles.

The flight crew had also confirmed before their arrival that they would be making an overweight landing. As a result, fire officers used thermal imaging cameras to check that the jet’s landing gear had not overheated during the emergency landing. Once it was confirmed there was no overheating or fire, emergency crews were stood down.

A spokesperson for the airline said: “Our team at Shannon Airport is providing assistance to customers of United flight 37 (Edinburgh-New York/Newark) which diverted to Shannon Airport to address a technical issue. Our maintenance team is currently inspecting the aircraft which is currently scheduled to depart from Shannon for New York/Newark at 2:00 pm (local time) today. We apologise to our customers for the inconvenience caused.”