Some of the County’s top young athletes were in action this weekend with four medals returning to Clare from overseas.

Newmarket-on-Fergus athlete Gearoid McMahon finished twentieth in the European Athletics Youth Championship in Tbilisi. In his first European Championships, Gearoid’s time of 53:38:62 was some bit off the victorious Lukasz Niedzialek of Poland (44:06:49). The sweltering heat in Georgia is believed to have affected the promising Clare race-walker who will have gained plenty of experience from this competition.

1,200 participants were competing in Tbilisi with fifty one countries represented in the European Athletics Youth Championships.

Ennis’ Tony Odubote collected a bronze medal in the Boys 400m (49:24) he was three seconds off Blaine Lewis-Shallow of England. There was further success for the Rice College student, he was part of the 4x400m relay team that collected silver (03:26:52). Tony also had the honour of captaining Ireland for this championship.

Killaloe’s Joseph McEvoy was the recipient of a bronze medal in the Boys High Jump with a score of 1.96 setting a new personal best. Ireland also took the silver medal with Jeremiah Keary jumping 1.99.

Alexandra O’Neill was in action in two different events. O’Neill collected a bronze medal as part of the Irish 4x300m relay team along with Lauren Cadden, Davicia Patterson and Miriam Daly. She finished in fifth for the Girls 800m (02:17:51).

Conor Devane representing St Flannan’s was in action in the 1500m Steeplechase. He finished in seventh position in a time of 04:53:87.

Joseph Miniter of CBS Ennistymon had a final standing of fifth in the Boys Long Jump, he was awarded a score of 6.71. 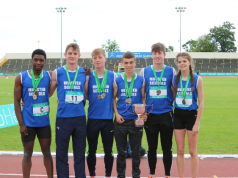 Success for Clare athletes in Santry