The father of a 21-year-old man missing since earlier this month is seeking the public’s help to find him.

Sean Lysaght made an impassioned appeal on Clare FM today after his son Aaron disappeared.

Aaron has been missing from his home in Prospect, Coolcullen, Co Kilkenny.

Sean’s last communication with Aaron was on the morning of July 14th. The last confirmed visual sighting of the young man was on July 1st in Middleton Co Cork.

Aaron, who is originally from Ennis, is described as being 6 foot tall, of medium build with blue eyes and brown, sandy hair. He was a tatoo of a swallow on his neck.

His family have been using social media, particularly Facebook, in the hope that it might lead to information about Aaron’s whereabouts. 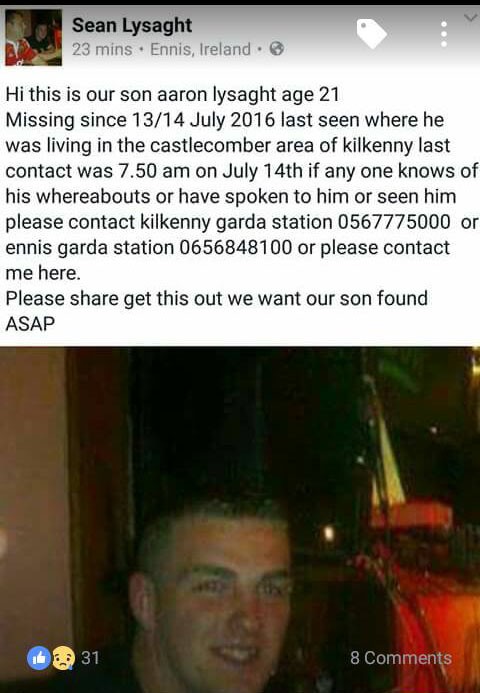 Aaron’s father Sean, who has acknowledged that Aaron has not been in a “good place” recently, is appealing to anyone with information to contact Ennis Garda Station on 065 6848100 or Kilkenny Garda Station on 056 777500.