Glór na Nollag in The Sacred Heart Church, Scariff on Friday and Saturday nights has been hailed “a resounding success”.

Billed as a fundraiser for Scariff Bay Community Radio’s march towards an FM Licence, and also for the local branch of St. Vincent De Paul who do such great work helping people in need at this time of year, over 500 people came and enjoyed the music and singing.

Led by the indefatigable Musical Director, John O’Brien from Whitegate, Massed choirs from all over East Clare came together to entertain the audience and both nights ended with a standing ovation for the performers.

Killaloe Male Voice Choir and The East Clare Community Choir joined with pupils from six National Schools in East Clare, Bodyke, Ogonnelloe, Tuamgraney, Raheen Wood, Mountshannon and Scariff, on the altar of the Sacred Heart Church for an evening of ecclesiastical music and Christmas songs.

Soloists also performed and there were some memorable and special performances by singers, Vashti Curran, Edel O’Grady, Paul Conroy, Trudy McGonigle and Amelia de Carteret, accompanied by John O’Brien on keyboards along with Killaloe’s Anne Cullen and percussionist Steve Lawrence. They were accompanied at times by Violin player Denise Glass, Flutist Robyn Levie and Cello player James Fennessy. Lisa glass performed one of her own songs “Snowflakes” on which she sang and played Harp.

There was two great nights entertainment for the people of East Clare and their guests, which was topped off with a visit by Santa on Saturday night who brought presents for all the children who had performed so well. 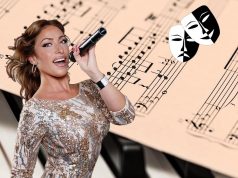