Clare’s senior footballers have begun preparations for the 2017 campaign with plenty of changes in personnel to their squad.

Kilmurry Ibrickane’s Enda Coughlan was the longest serving member of the panel this year but he has since announced his retirement from inter-county football. Pat Burke of the Kilmacud Crokes club has played for the past two seasons with Clare having previously lined out for Dublin, he will not be involved with the side for 2017.

Podge Collins is committing to the hurling cause while others to depart include Cooraclare’s Sean O’Donoghue, Martin O’Leary, Alan O’Neill, Declan McMahon, Manus Malone and Sean Haugh.

Colm Collins welcomes back the trio of John Hayes, Ciarán Russell and Shane Brennan to the panel. Hayes last played for the county in 2012, Russell had established himself as a regular starter during 2015 as had Shane Brennan but both were not part of this year’s panel. Clondegad’s Podge McMahon is also to return.

After impressing in this year’s club championship Cooraclare midfielder John Looney has earned a call-up to the provisional squad. He has been joined by Kilrush Shamrocks duo Gearoid O’Brien and Darragh Bolton, St Joseph Miltown’s Kieran Malone, Mikey O’Neill of Lissycasey and Kilmihil’s David Egan. 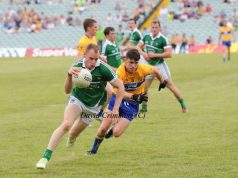