He joins the club’s U19 squad following a series of trials. Prior to this call-up, Gilbert has played with Newmarket Celtic from an early age while he also represented his county at every age-group in the underage ranks.

His quality was evident from an early age and Adam often trained and played for teams well above his age category such was his competence.

Gilbert who will turn eighteen at the end of the week usually operates from the centre of the park. His ability to stay calm whilst in possession is central to creating opportunities for himself and his teammates during games.

A Leaving Certificate student at St Caimins Community School in Shannon, Adam is rarely seen without a football by his feet and becomes the latest Clare footballer to join the Galway club.

Last season, four Clare representatives lined out with Galway Utd’s U19 side managed by Johnny Glynn that finished in fourth position in SSE Airtricity League U19 Southern Elite Division. They were James Tierney from Corofin, Ennistymon’s Ciaran Buckley and Ennis duo Mikey Whelan and Maurice Nugent with the latter going on to represent his country. Finished in fourth position 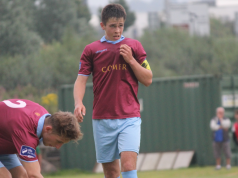