It was a routine performance from Clare as the Moloney/O’Connor era began with twelve point win over Kerry.

In front of less than 200 spectators, Kerry played the first half with a considerable breeze at their back but it was Clare who raced into a lead, shooting points from the hurleys of Aaron Cunningham and David Reidy. Lixnaw danger man Shane Nolan who played with 14 on his back, fired over three consecutive frees to give Kerry the lead after 8 minutes.

Kerry showed glimpses of promise but can thank Martin Stackpoole for keeping down the Clare scoreline as he pulled off two outstanding saves from David Reidy and Aron Shanagher. Clare showed signs of indecision in their defence and Jordan Conway was the beneficiary shooting two points in quick succession. Kerry found their feet midway through the first half and reduced the gap to just two, Shane Nolan playing with confidence landed a huge effort from 80 yards from the visitors goal. Clarecastle’s Patrick Kelly levelled it up with a monstrous attempt on the 30th minute but that’s as close as they got to the Banner men.

Clare welcomed three new debutants into the starting 15, Eoin Quirke, and two Inagh-Kilnamona’s players, Jason Mc Carthy and Kevin Hehir. And as the opening half was drawing to a close, lively Hehir danced his way through to the 21 yard line and batted the sliotar past the powerless Stackpoole.

Despite having the aid of the win at the beginning of the second half, Clare allowed their opponents get off to the better start. John Egan fed Thomas Casey and he reduced the score to three after the restart. Nolan, who shot five points from placed balls in the first half, hit his sixth moments after David Reidy converted his free.

The Banner flexed their muscles with two quick fire points from Seadna Morey and Aron Shanagher. But it was stand in captain Padraic Collins who helped his side into an 8 point lead when he pulled the ball to the net on the fifty fifth minute. Mickey Boyle responded scoring a fabulous goal in the next attack.

Halfway through the second half and intensity levels that were shown for the first 60 minutes dropped, as the clock crept into added time, Stackpoole again denied Shanagher but it didn’t matter as referee Jason Mullins awarded Clare a penalty. Substitute Peter Duggan slotted the resulting penalty over the bar. The visitors kept the score board ticking over, David Reidy notching up double figures from placed balls today.

Although the second half didn’t live up to the energy the opening half displayed, the new management will be satisfied as their side won both halves. Clare will now quickly turn their attention to Limerick on Wednesday night in O’Garney Park,Sixmilebridge. 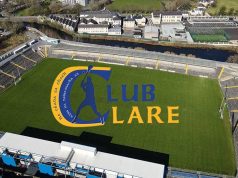 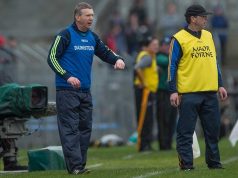 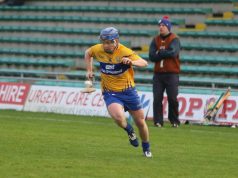 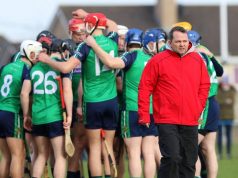 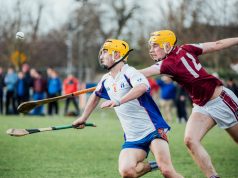 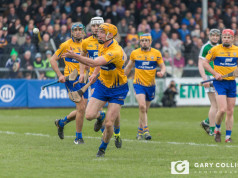 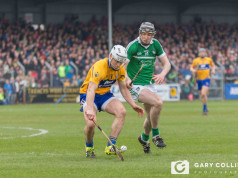