Sixmilebridge Councillor PJ Ryan has revealed he helped to save a life as a result of attending suicide prevention classes.

As a member of the Shannon Lions Club, Ryan was informed as to what approach should be taken to prevent suicide. He told the February meeting of Clare County Council that he was forced to bring this training into practice when he encountered an individual who he thought was contemplating suicide.

Ryan’s training assisted him in identifying symptoms and he successfully intervened to prevent a tragic outcome. The Independent Councillor informed fellow elected members that the individual is very content with their life today and has passed on their appreciation to the local representative for his actions. “I have met the person on several occasions and they have thanked me numerous times”.

He credited the decision of the Shannon Lions Club to educate members in helping to save the life. Throughout Ireland and the British Isles there are 17,000 active members belonging to 900 local clubs. This year Lions Clubs International celebrates it centenary.

A joint request from Ann Norton, Tom McNamara and Pat Burke proposed that a representative HSE give a presentation to Councillors “mental health issues and suicide prevention”.

“We need to have an Ireland without suicide”, stated Fianna Fáil’s Tom McNamara. Along with Norton and Burke he is a member of the HSE Mid West Forum and new members of the group recently attended a presentation on suicide prevention.

Fine Gael’s Mary Howard backed the proposal saying “Over 400,000 Irish people suffer from depression, we must give ourselves the tools to be aware if this situation arises”. She feels that all members of the public should be aware of what to do when it comes to dealing with someone dealing with mental health illnesses.

An invitation will now be sent to the HSE to send a speaker to address members of Clare County Council on suicide prevention and mental health.

The following agencies/organisations can be contacted for individuals seeking help.
Pieta House – 1800 247 247
Samaritans – 116 123 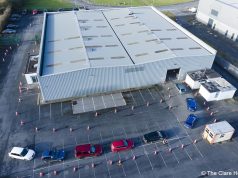