Due to the huge interest in this wonderful documentary, glór will host an extra screening of the Silver Branch, on Sunday afternoon at 3pm, December 2nd.

The award-winning documentary, The Silver Branch, by Clare based director Katrina Costello comes to glór this Saturday.

The Silver Branch, which scooped yet another award last weekend, is a cinematic eulogy to nature, landscape and agrarian culture, which invites the viewer to follow in a hypnotic journey into the self.

Katrina has just returned from Austria where she collect the winner’s prize at the Innsbruck Nature Film Festival.

When it screened in glór earlier this year, over 500 people turned up – the largest crowd ever to attend an event in glór. When it screened in Ennistymon on Culture night people queued for an hour before starting and many were turned away.

Katrina’s production returns to glór on October 20th and Clare audiences can also catch a viewing in Limerick.

Internationally the film is doing very well with packed screenings, standing ovations, laughter and tears. This month it is screening throughout Ireland, and also in Austria, Australia, Rocky Mountains, Nova Scotia, Canada, Washington and UK and more

Through Patrick’s eyes and pastoral verse, this beautifully shot film immerses us in the exquisite textures of the natural world, bringing us a rare glimpse of a disappearing way of life with all its richness and roguery, and leading to a deep connection with the Earth and our ancestral wild spirit.

Patrick longs to farm in the quite pace his ascendants did, to be free and to live in harmony with the landscape: The landscape\nature itself is our heroine: – beautiful, strong, wild, yet nurturing and all giving, but she needs protection from the cold front of capitalism and government sell outs.

Patrick is the perfect hero, a rugged Burren man with a vision and is willing to risk all when he’s called to Battle in the Supreme courts to decide on the fate of this iconic wilderness.

Though it is centred around this remarkable man and his search for ‘unity of being’, it explores more universal themes:

It is a story of life, love, family, grief, of commitment and of the struggles of modern day life, which invites the viewer to follow in mindful meditation, to take a journey into the self and exam the relationship between man and landscape, between tradition and spirit, between body and soul. 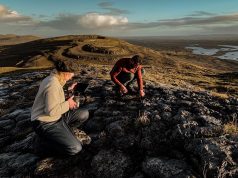 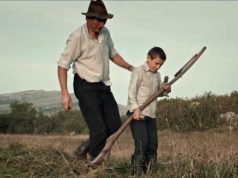