One of the country’s busiest tourist routes has been closed as a result of flooding after a night of heavy rain.

The N67 in Co Clare, one of the main access routes to many of the county’s tourist attractions, is expected to remain closed into the afternoon.

A car became trapped in one of several floods on the route between Ballyvaughan and Lisdoonvarna where the month-long matchmaking festival gets underway this weekend.

Two units of the fire brigade from Ennistymon and Gardaí responded to the incident after being alerted at around 9.45am. On arrival, fire crews found a middle-aged man still in the vehicle.

Specially trained fire service swift water rescue technicians waded across the flood to reach the BMW car and carried the driver to safety. He as unharmed.

The worst flooding is located between the famous Corkscrew Hill and the entrance to the Aillwee Caves. Cars, tour buses and other vehicles are being turned back from road blocks on both sides of the flooding and diverted via alternative routes.

A recovery vehicle is expected to try and remove the stranded car this afternoon when an assessment will then be carried out to see whether vehicles can safely pass through the flooded area.

Clare was one of several counties placed under a status yellow weather rainfall warning.

Met Éireann forecasters had predicted that persistent heavy rain for today and that those counties under the status yellow warning could receive as much as 50mm of rainfall. 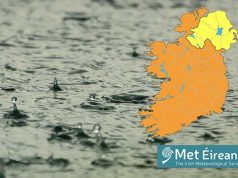