One teenager has been airlifted while another was transported by road to hospital following a collision between two dirt bikes in North Clare this afternoon.

The collision is understood to have occurred at around 4.15pm on a dirt road in forestry between Fanore and Lisdoonvarna. The accident involved two teenage boys who had been travelling in opposite directions when their dirt bikes collided.

Emergency services were alerted and Gardaí, the National Ambulance Service (NAS) and Ennistymon Fire Service dispatched resources to the incident. The Athlone-based Emergency Aeromedical Service (EAS) air ambulance, operated by NAS and the Irish Air Corps, was also requested to attend the incident.

The helicopter, Air Corps 112, was returning to Athlone from University Hospital Galway when the crew were rerouted across Galway Bay to the incident. The helicopter landed at the GAA field in Lisdoonvarna as there was no safe area close to the scene where they could set down safely.

One of the casualties was transported from the scene by ambulance to meet the helicopter. He was then airlifted to University Hospital Galway (UHG) for treatment while the second boy was transported to UHG by road ambulance.

While both boys are reported to have been ‘seriously hurt’ it’s not believed that either casualty suffered life-threatening injuries. The pair are believed to be in their mid and late teens.

Gardaí have confirmed that the Health and Safety Authority (HSA) has been notified of the incident while Gardaí are also investigating the circumstances of the collision. 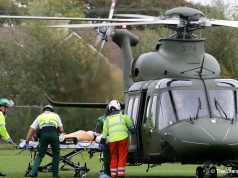