“Wide Eyed Lady” was written by Co Clare artist Lou McMahon and is a remixed and remastered version of the track from her debut EP (2008).

Although “Wide Eyed Lady” was never officially released as a single, it featured on the award-winning compilation album (2014) The Ultimate Guide To Irish Folk (ARC Music) and received national and local airplay.

“Wide Eyed Lady” tells a dark folk tale about a young girl named Heather who toys with necromancy to her own demise. WIDE EYED LADY is a song is about a young girl named Heather, running from one sin to another, she is wide-eyed and lost in life.  Inspired by youth and naivety, and a real story from Lou’s teenage years where she was saddened to watch a fellow-alumni succumb to the dark forces of addiction due to running with the wrong crowd.

The song also highlights the beginning of an unwarranted anxiety disorder that Lou struggles with, as noted by Bernard Clarke, on The Blue of the Night radio show RTE Lyric FM “the song moves from panic to empathy”. Thematically this piece explores the darkness in an emotional minor key, the concepts are woven together by Lou’s penchant for the eery in a storytelling style similar to a dark Irish myths, tales and folklore.

As Lou says, “Wide Eyed Lady” is inspired by youthfulness in a scary world. A girl starting on a journey into adulthood, trying to find a way forward, searching for validation and getting it from the wrong sources.

When I wrote the song, I was thinking about a friend who was throwing away her potential unbeknownst to herself, she was involved with the wrong people -drug takers and dealers, she was behaving promiscuously and I was feeling sad for her. 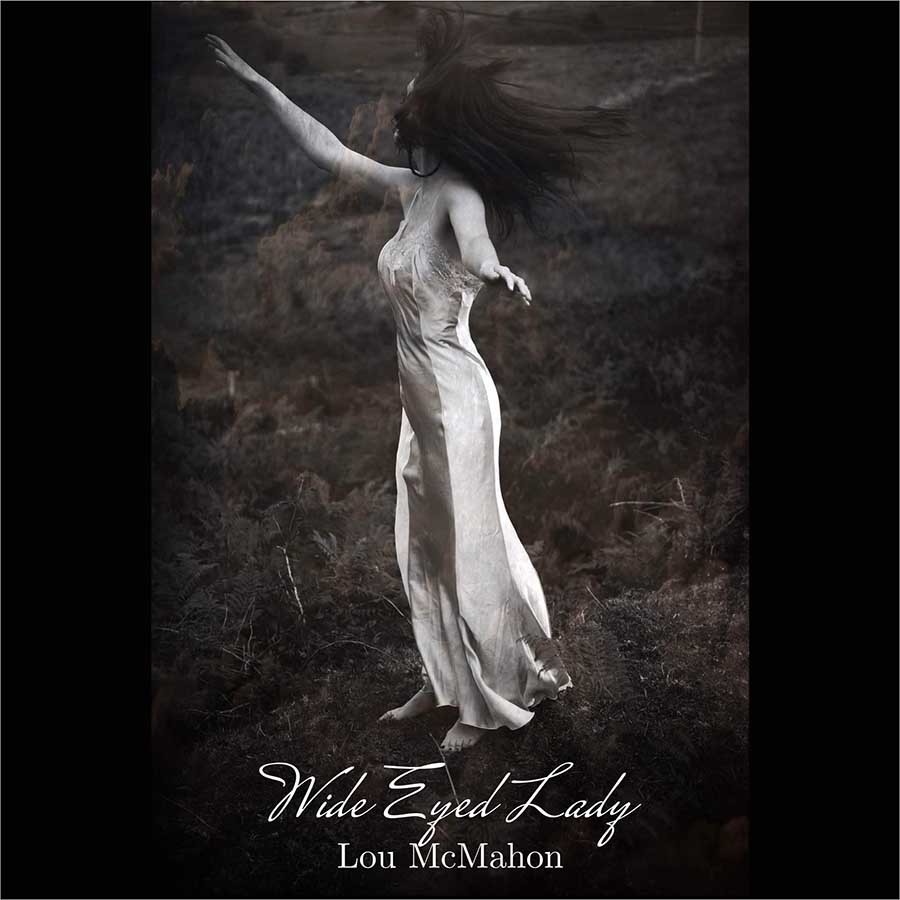 The song is also inspired by my own naivety, and vulnerabilities intertwined with my penchant for dark, emotional, gothic folk songs. The story runs on themes of horror, panic, fantasy, youth and femininity.”

Lou McMahon is a much-loved Irish singer/songwriter from County Clare. Through the years, Lou has performed as a support act to many influential Irish artists including Mundy, Mary Coughlan and Freddie White.

She has regularly toured throughout Europe as a headline act and over the years she has performed as a support act to many influential Irish artists, most notably Jack Lukeman on his 27’s Club tour and Terry Woods of The Pogues fame works with Lou on her recordings.

Lou enjoys being a freelance culture journalist contributing to Culture File on RTE Lyric FM (drive time) and she presents a radio show called The Cool of the Evening on Limerick City Community Radio. Her thirst for travelling the globe lead to Lou working as a featured soloist musician with Princess cruises, which resulted in the making of A RIVER music video and documentary. McMahon has performed in Canada, Australia, Europe and America. Lou McMahon is represented by Manager Joanne Ledesma in the USA.

Wide Eyed Lady video is scheduled for digital release on October 30th 2020. The single for Wide Eyed Lady will be on sale Tuesday November 10th but is available now for pre-order on iTunes and Pre-Save on Spotify