Fire crews in Co Clare had to leave fallen trees where they lay because conditions were too dangerous for them to safely deal with the incidents.

As Met Éireann’s Status Red wind warning for Clare came into effect at 4.00pm on Tuesday, fire crews based at the county’s seven retained stations were called to their bases and placed on standby to respond to calls.

Crews from many of the county’s stations attended incidents at the same time however in some cases, where it was deemed too dangerous for crews to work, they left the scene to return later when conditions improved.

Fire service management confirmed however, where a person is in serious danger, fire crews are ready to respond immediately however if the call is for an incident where no life is threatened, fire service personnel may have to withdraw for their own safety.

These calls will however be dealt with once winds have died down but this could be after 1.00pm on Wednesday when the Status Red warning is due to expire.

Some farm buildings have collapsed due to strong winds from storm #Barra. Shed down near N67 in Bealaha #Clare pic.twitter.com/mHnI5aw3wG

Some private homes and agricultural buildings were reported to have sustained damage in the west of the county during the afternoon. Roof tiles were said to have been blown off houses in Kilkee while roofing from farm buildings also suffered damage.

One farm building in Bealaha, on the main N67 Kilkee to Doonbeg road, was extensively damaged after its roof collapsed in the high winds.

No injuries were reported in any of the incidents.

The ESB has warned households in Clare that lose power this evening may have to wait until tomorrow for it to be restored.

More than 2,500 customers are understood to be without power in Co Clare mostly in west Clare and particularly in the area of the Loop Head Peninsula. Faults reported earlier in the day were mainly resolved quite promptly however anyone affected later in the day, after the Status Red warning came into effect, could have to wait until Wednesday for the issues in their areas to be resolved.

The ESB has confirmed that it expects ‘significant damage’ to occur throughout Clare as a result of the high winds forecast for the area.

The company spokesperson confirmed they have also contracted in external crews from contractor companies to assist with faults as they arise around the country. The company also added that restoration of supply will be ‘weather dependant’ and crews will only deal with issues when it’s safe for them to do so.

Check or report an outage to the ESB.

At Shannon Airport, winds were reported to be gusting well over 100 kms an hour at times on Tuesday.

Earlier in the day, two Ryanair flights that were due to land at Cork Airport diverted to Shannon.

Later however, the winds were so strong in Shannon that two flights due to land there were forced to divert to Dublin. A Lufthansa aircraft, due in Shannon for maintenance, made two attempts to land but aborted both efforts before rerouting to Dublin instead. The other flight was a Ryanair service from Tenerife in the Canary Islands.

Aer Lingus had cancelled their Shannon to Heathrow afternoon service early in the day while Ryanair also cancelled its Shannon to London Stansted late night flight. 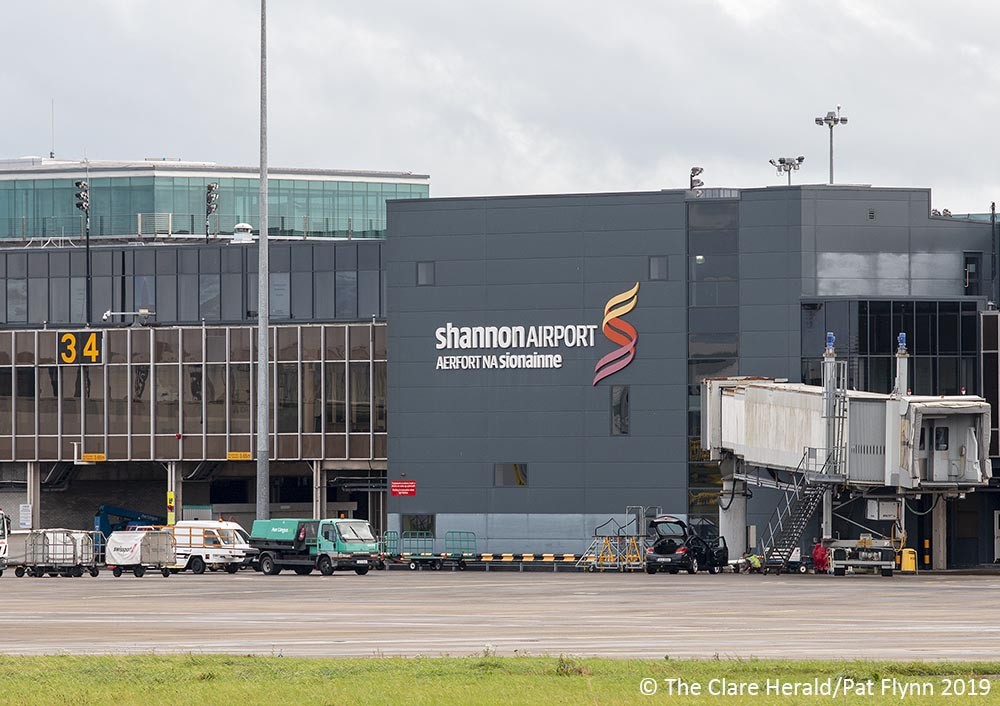 A spokesperson for Shannon Airport said: “While the Ryanair inbound Gatwick service arrived safely at Shannon at 2.40pm, there are flight cancellations due to this evening due to the severity of storm Barra.

“With severe gusts currently being experienced at Shannon Airport, the Ryanair Shannon to Malaga service as well as the London Stansted inbound and outbound services are cancelled. In addition, Aer Lingus services from and to Heathrow Airport scheduled for this evening have been cancelled.”

“As storm Barra could potentially continue to impact Co. Clare early tomorrow, we would advise Intending passengers for early morning flights to contact their airline before travelling to the airport. Flight information will be posted on all Shannon Airport social media platforms and the airport website as it becomes available,” said the spokesperson.