Gardaí in Ennis are investigating a serious daylight incident described as ‘very traumatic’ for the victims.

At 1.10pm on Sunday (3rd April), a lady was walking on Drumcliffe Road, Ennis with her two children.

Crime Prevention Officer for Clare Sergeant Triona Brooks outlined what happened: “The lady was approached from behind by three males. One grabbed her from behind and another tried to take her handbag and broke the strap in the process. The children both had mobile phones in their hands and one of the males took these and smashed them off the ground.

While this was going on the third male was talking on a mobile phone. This was very traumatic for the mother and her two children. If anyone witnessed this incident or anyone that may have dash cam footage we are asking them to contact Ennis Garda Station on 6848100,” Sgt Brooks said.

Meanwhile, Kilrush Gardaí are investigating a robbery which occurred at 12.30am on the 2nd April at Toler Street, Kilrush. A man was walking along Toler Street when he was approached by a male wearing dark clothing. This male knocked him into bushes at the side of the street and took a sum of money from him and left on foot.

If anyone was in the area of Toler Street between 12 midnight and 12.45 a.m. and saw this male or anyone who has dash cam footage we would ask them to contact Kilrush Garda Station on 9080550. 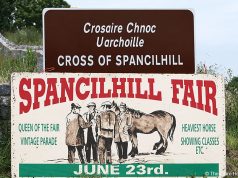