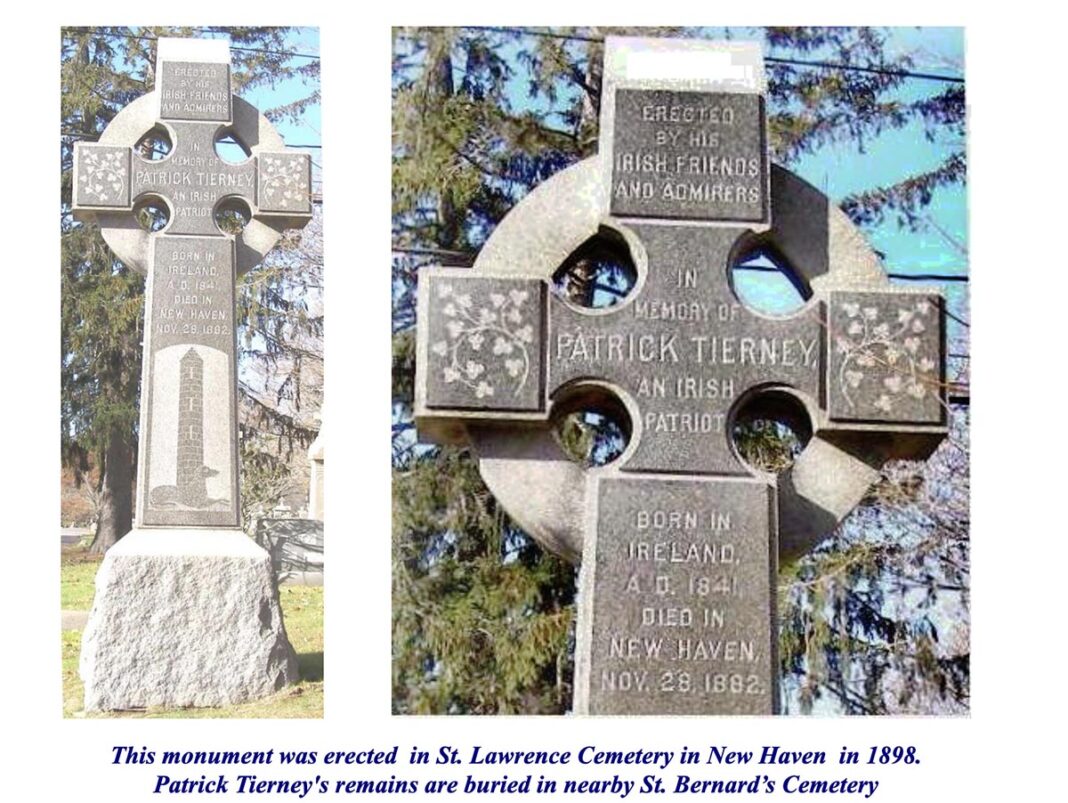 On This Day – 140 years since death of Fenian Patrick Tierney

140 years ago Fenian Patrick Tierney died on November 29th 1882. He was born in Ennis Co. Clare in 1842 and at the age of 18 joined the 87th Royal Irish Fusiliers. Tierney also secretly joined the Irish Republican Brotherhood.

Tierney led a dangerous double life as a Fenian and a crown soldier. He gained military experience in the British army which he then used in the Fenian movement but, an informer would be Tierney’s downfall.

John Warner was a Sergeant in the Cork Militia who infiltrated the Fenian movement in Munster as a highly effective informer for the crown. When Warner’s identity as an informer was discovered in 1866 Tierney stepped up to take care of the matter.

Tierney got information that Warner was in Howth Barracks. Armed with a knife he walked into the barracks and stabbed Warner. Tierney was seized by the barracks guards, given a savage beating and put in handcuffs.

Warner survived the stabbing and Tierney evaded the hangman’s rope. He pled guilty and rather than give his real name he gave an alias – Edward O’Connor. Tierney did this to avoid a trial which could have implicated his fellow Fenians.

Tierney’s first eight months behind bars were spent in Mountjoy before he was sent to Cork to serve time in a place known as ”hell on earth” – Spike Island Prison.

Still known as Edward O’Connor, Tierney spent his days doing hard labour breaking rocks. While doing this he cut his hand badly. When he asked for medical aid he was instead offered a flogging by the prison guards.

Tierney could take no more. On the 18th of May he slipped away from the island prison. He found a small boat and rowed towards the mainland but, his injured hand hampered his escape. Tierney was easily caught and taken back to Spike Island where he got 36 lashes and put into solitary confinement where he was chained to the stone floor with a single blanket for his bed.

Tierney had to wear a black shawl covering his body from head to toe while his right arm was chained to his left leg. The shawl and shackles stayed on his body for the remainder of his time on Spike Island.

12 years passed before Tierney’s true identity was discovered. His siblings in Clare did not know what had become of their brother. For years they searched and finally in 1878 his sister Bridget learned that her brother was serving time on Spike Island Prison under the name Edward O’Connor.

Bridget went to Cork where she found her brother malnourished and broken. She set in motion his release and petitioned Irish MPs Spencer Talbot and Henry Holland who raised the plight of Tierney in the House of Commons.

On the 18th of November 1878 Tierney was released from Spike Island, but only on condition he leave Ireland.

Tierney’s only friend on Spike Island was fellow Fenian Edward O’Kelly and before left he was granted a brief meeting with O’Kelly to bid him farewell. O’Kelly had known Tierney’s real identity but, he kept it a secret within the prison walls.

Tierney was put on a steamer which took him across the Atlantic Ocean and in December he arrived in New York City where The Irish American Weekly News reported: ”The hardships to which Patrick Tierney was subjected in prison have made him prematurley old. The haggard lines in his face tell too plainly the story of the tortures to which the brutal jailers of Engalnd put upon him….”

A year later Tierney’s prison friend Edward O’Kelly was released. He too was sent in exile to the United States and when he arrived in New York he heard a voice call out from the crowd on quayside – ”Hello 13938!” It was Tierney calling out the prison number of his old friend O’Kelly. O’Kelly responded ”Is that you 12901?”

Sadly O’Kelly would not live long to enjoy his freedom. Just five months after arriving in New York he died. O’Kelly’s health was broken from his time on Spike Island and so too was Tierney’s.

Tierney left New York and found work in a stone quarry in Connecticut. He was not long in the job when his declining health saw him discharged and poverty soon plagued the Clareman.

Clann na Gael in New Haven came to Tierney’s aid and saw that he was treated in hospital but, his days were numbered.

Patrick Tierney died in New Haven hospital on the 29th of Novemnber 1882. Clann na Gael covered his funeral costs and he was laid to rest in St Bernards Cemetery.

In 1898 the Ancient Order of Hibernains and Clann na Gael raised money for a marker over the Clareman’s grave. The stunning 12 foor stone celtic cross has a simple inscription – ” Patrick Tierney Irish Patriot.”