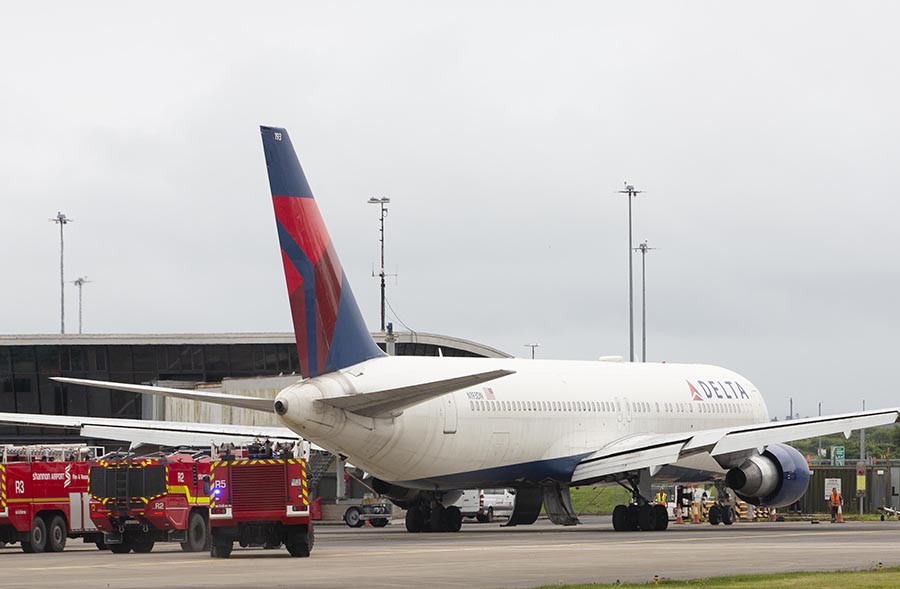 The airline has apologised to customers who were taken to Dublin by bus there were no hotels available to accommodate them in the Shannon area.

Passengers from flight DL-123 were taken to Dublin by bus and back the Shannon again early this morning for their flight home.

A replacement aircraft was flown in from the U.S. this morning to take the passengers to their intended destination, Boston. The rescue flight was originally due to leave Shannon at midday today then 12.30pm but by 1.40pm, still hadn’t departed.

In a statement, the airline said: “Delta apologises to our customers for the delay in their travel plans. Representatives from Delta are contacting each customer with an additional apology.”

A replacement Boeing 767 aircraft has arrived in Shannon from JFK International Airport in New York to collect the passengers. 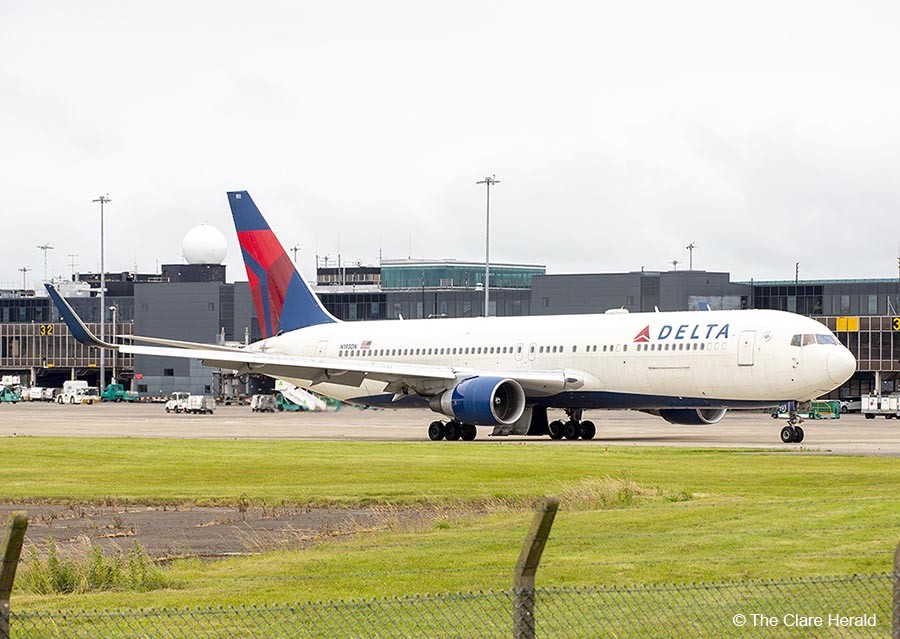 A replacement aircraft is expected to be flown to Shannon this morning to take stranded passengers to their destination. Boston-bound Delta Air Lines flight DL-123 was forced to make an emergency landing at Shannon Airport on Tuesday after the jet suffered ‘serious hydraulic issues’ soon after taking off from Edinburgh in Scotland.

– A replacement aircraft is due to be sent to Shannon to take passengers onto their destination. It’s expected that flight DL-9887 will depart Shannon at 12.30pm.

– Passengers were transported to Dublin by bus where they were accommodated in hotels before being taken back to Shannon again for their flight.

– Passengers have claimed they had to secure and pay for their own hotel accommodation in Limerick.

Delta Air Lines issued a statement saying: “Customers on Delta flight 123 on July 12 from Edinburgh to Boston, earlier safely diverted to Shannon, Ireland after a mechanical issue with the aircraft, are now being accommodated in hotels overnight near Dublin, the closest available and with ground transportation and meals provided. Customers will continue onto Boston tomorrow morning after transiting back to Shannon.”

Earlier: A US-bound passenger jet that suffered ‘serious hydraulic issues’ soon after taking off from an airport in Scotland, has made and emergency landing at Shannon Airport.

Delta Air Lines flight DL-123 took off from Edinburgh Airport at around 12.30pm bound for Boston in the United States. The Boeing 767-300(ER) jet had climbed to 33,000 feet and levelled off before the flight crew reported an issue with one of the aircraft’s hydraulic systems.

The crew entered a holding pattern off the Scottish coast as they attempted to troubleshoot the problem. The aircraft circled for about 15 minutes before the crew decided to divert to Shannon which, at 3,199 metres, is the longest runway in Ireland.

It’s understood that the issued involved the aircraft hydraulic system that operates a number of aircraft functions. The crew advised air traffic controllers that they would not be able to vacate the runway under the aircrafts own power after landing as they believed they would not have nose-wheel steering.

As the flight turned to divert to Shannon, the crew declared an emergency and broadcast an emergency squawk on the aircraft’s transporter. This is to alert air traffic controllers that the crew had an emergency on board.

On the ground at Shannon Airport, an emergency plan was put into action which involved alerting the local authority fire service, HSE, National Ambulance Service and An Garda Síochána.

Units of Clare County Fire and Rescue Service from Shannon and Ennis stations were mobilised to the airport along with a number of National Ambulance Service resources and Garda units.

A decision to ‘sterilise’ the runway was taken to ensure it was clear for the inbound emergency aircraft. This meant the no flights could land or take off until the plane had landed safely.

One Aer Lingus flight was delayed from departing while a Ryanair flight from Alicante diverted to Cork Airport. The flight was due to return to Shannon after refuelling in Cork. 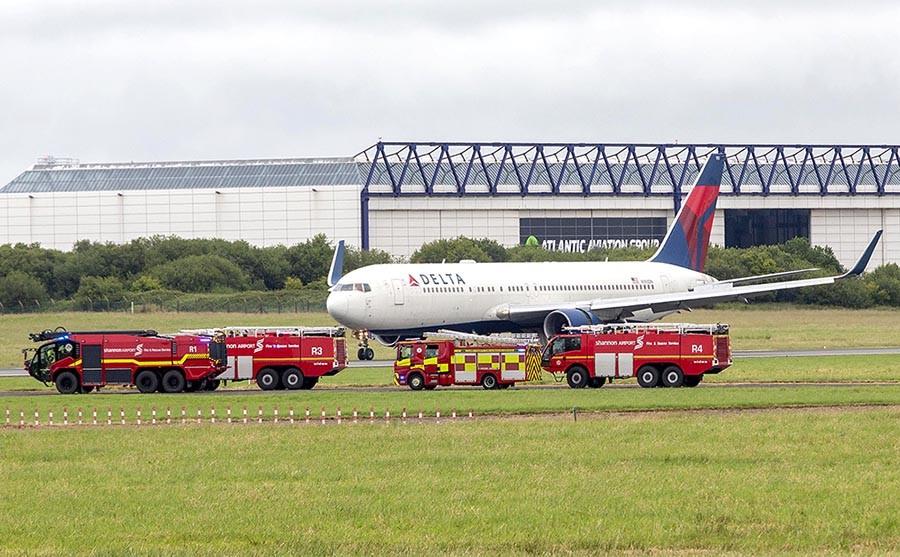 In the meantime, at Shannon, airport and local authority fire and rescue crews were mobilised to holding positions adjacent to the runway in advance of the aircraft’s arrival. A tug was also placed on standby in case the jet had to be towed from the flight strip.

The aircraft landed safely at 1.43pm but required the full length of the airport’s runway to stop. On landing, the crew confirmed they had steering capability and would be able to vacate the runway under their own power.

Rescue vehicles pursued the aircraft along the runway after it landed while fire crews used thermal imaging cameras to inspect the plane’s braking system and undercarriage to ensure it hadn’t overheated during the emergency landing.

Once this had been completed and it had been confirmed that everything was normal, the jet taxied to the terminal accompanied by rescue crews. Further checks were carried out by fire officers at the aircraft’s parking position.

So left on a @Delta #767-300 out of #EDI & one of the hydraulic systems failed over the Irish Sea, so we are sitting here now at #SNN – #Delta doesn’t service #Shannon so not sure what’s going to happen. #Boeing767 #avgeek #aviation #Boeing pic.twitter.com/PEUI8ZRTia

An inspection of the runway was undertaken to check whether any hydraulic fluid or debris had been left behind by the diverted aircraft. When it was confirmed the runway was clear, normal operations promptly resumed at Shannon. A hydraulic leak was however detected after the aircraft had parked at the terminal and dealt with.

Passengers have been deboarded and taken into the terminal as it’s expected the aircraft will be grounded until the mechanical issue has been investigated and resolved.

While a comment is awaited from the airline it’s expected that either a replacement aircraft will be sent to Shannon or the passengers will have to be accommodated in hotels overnight.