A Co. Clare based action group is demanding government support for Shannon Airport in COVID recovery and beyond.

Speaking at a recent rally to relaunch the Save Our Shannon campaign, event organiser Denis Vaughan said that special attention is needed for Shannon and the other regional airports.

The SOS group held a socially distanced rally involving just 15 supporters – at Shannon Airport agreed with the authorities in light of COVID concerns – but say there is a groundswell of opinion across the mid-west that Shannon is not getting the support it needs or deserve.

Mr Vaughan said, “COVID has exposed weaknesses everywhere and there’s none bigger than in Irish aviation where policy is needed to safeguard valuable national assets like Shannon Airport which are critical to the economy of the mid-west and westerns regions. It is vital that government acts now to support the thousands of jobs that depend on the airport for their livelihoods.

“Our government must do something to incentivise airlines to put air services into Shannon and the other smaller airports. Otherwise, we will become a one-state airport. It demonstrates that the disastrous government transport policies are not addressing the future of Shannon, the associated employment and the regional economy. The livelihoods of thousands of people are at stake.” 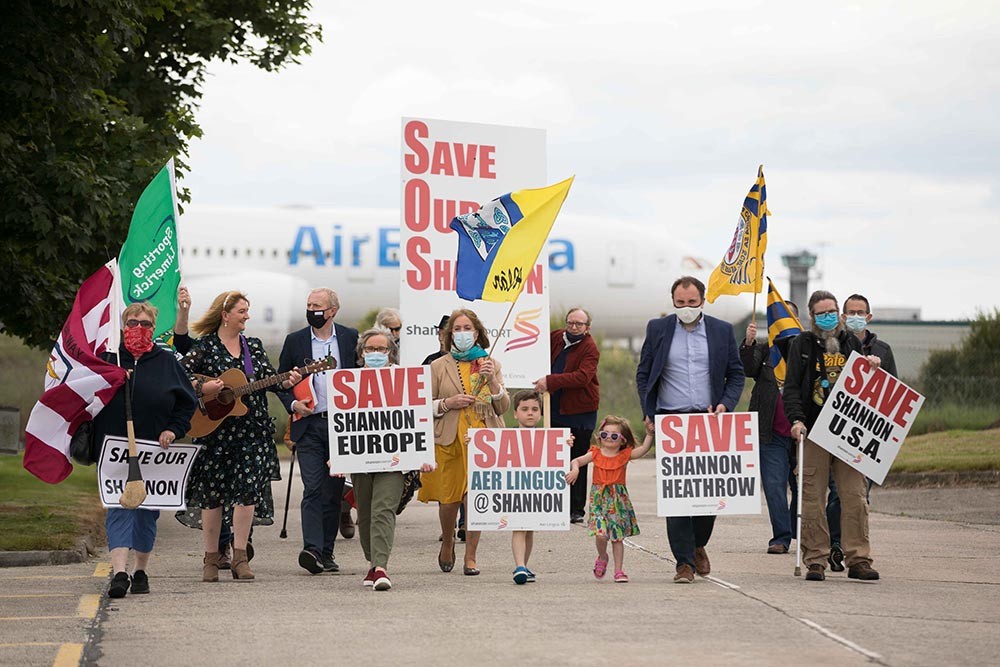 He added, “Of particular concern to SOS is the way in which Aer Lingus announced their departure from Shannon and Cork.  Aer Lingus Shannon is constrained by politics and the self-interest of Dublin Airport. SOS favours the intervention of the Government to force Aer Lingus to reverse their plans for Shannon and Cork, after all are they are subsidising the airline. The government needs to support Shannon and champion regional economic development – a radical departure from past approaches.”

Mr Vaughan pointed out that prior to the pandemic Shannon Airport was a major contributor to the economic health of the region and with the right support in place, Shannon Airport  can play a central role in Ireland’s post COVID recovery.

“It’s crucial. It’s an emergency. We need action. Shannon Airport is massively important to our region, from an economic standpoint and the wider role in the lives of so many people in the Mid-West. We call on the government to initiate the needed steps for revival now. Let Shannon Airport and the Mid-West play a central role in the post-COVID national recovery.”