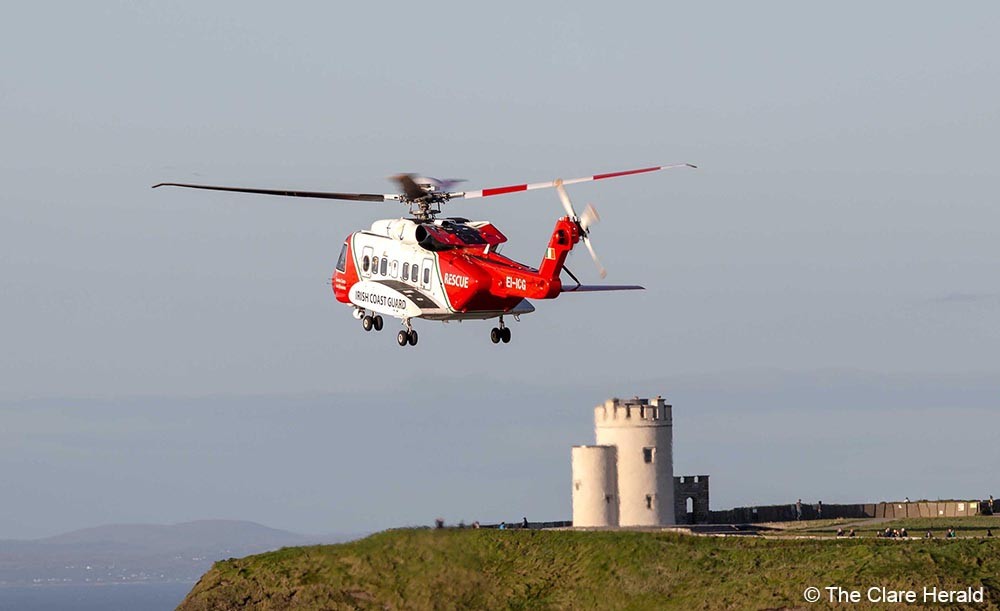 A body has been recovered from the sea off Co Clare this afternoon. The body is believed to be that of one of two men reported missing separately in the area in the past week.

An initial search was conducted at the Cliffs of Moher late on Friday night last (April 1st) amid fears that a person may have entered the sea. The alarm was raised at around 11.30pm after a car was located in a carpark at the popular tourist attraction.

The Doolin unit of the Irish Coast Guard was tasked to assist Gardaí undertake an initial search of the area around the Cliffs of Moher visitor centre and surrounding pathways.

The Shannon-based search and rescue helicopter was also requested to assist in the search. Rescue 115 conducted a detailed search of the area between Doolin and Hags Head. The search was stood down for the night when there was nothing found.

Doolin Coast Guard volunteers returned to the scene again on Saturday morning and walked the cliff top paths in search of any sign of the missing man. The team also launched a drone as part of the operation and searched the coastline and cliff top areas.

Rescue 115 also returned to the scene carry out further searches on Saturday afternoon.

The search had been hampered by poor weather earlier this week however a body was spotted in the water close to the cliffs this afternoon.

Rescue 115 had returned to the area along with Doolin Coast Guard volunteers to continue their search. After the crew of Rescue 115 spotted a body in the water, the Aran Islands RNLI lifeboat was requested to assist with the recovery operation. The volunteer lifeboat crew recovered the body from the sea about a kilometre south of O’Brien’s tower at around 6.15pm.

The remains were transported by the lifeboat crew to the pier at Doolin where Doolin Coast Guard volunteers transferred the body to their nearby base where a doctor and Gardaí were waiting. The man was formally pronounced dead and his body removed to University Hospital Limerick were a post-mortem examination will be carried out.

The county coroner has also been notified.

Gardaí are treating the death as a ‘personal tragedy’ and will prepare a file for the coroner who will hold and inquest at a later date.

Meanwhile, the search continues for another man reported missing in the area yesterday.