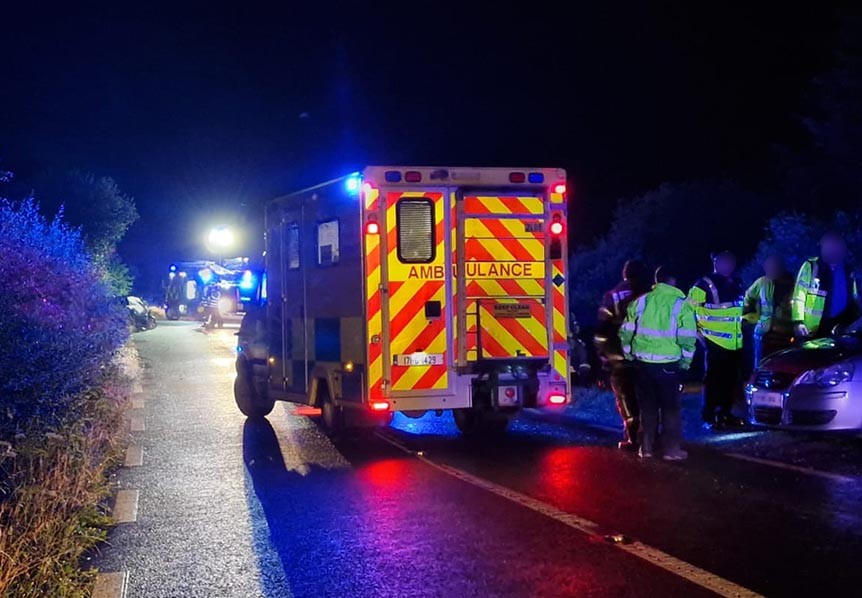 Three people have been hospitalised following a road traffic collision in Clare this evening.

The two-car crash occurred at around 8.30pm on the R474 main Ennis to Miltown Malbay road about 1.5kms east of Connolly.

Two units of Clare County Fire and Rescue Service from Ennis station responded to the incident and were first to reach the scene. On arrival, fire crews found two cars had collided almost head-on and that one had left the road coming to a stop in a ditch. The road was completely blocked by the collision.

Fire service first responders assessed the three occupants, a man and woman travelling in one car as well as the driver and sole occupant of the second vehicle. Fire crews administered first aid to one man who has complaining of upper body injuries.

It took over an hour for an ambulance to reached the scene while a second ambulance that had been dispatched to the incident was diverted to another call. A rapid response advanced paramedic unit also responded to the incident also attended the incident. Emergency services worked in heavy rain as thunderstorms swept across the county.

All three casualties were removed to University Hospital Limerick for treatment but none of them sustained serious injuries. One man is understood to have suffered a shoulder injury while the two others were said to have sustained cuts and bruises.