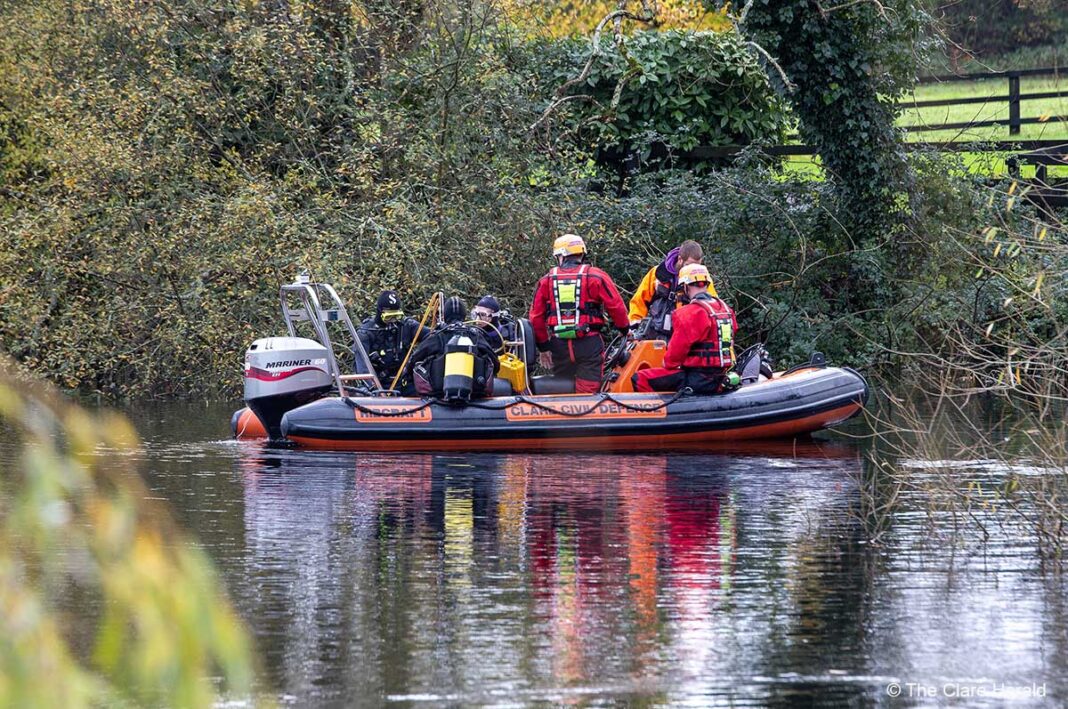 4.45pm – The search has now been stood down for the day with no trace of the missing man being found. The Shannon-based Irish Coast Guard helicopter also joined the operation for a time this afternoon.

The search will resume on Sunday morning.

Volunteer divers from four sub aqua clubs have joined the search for a man seen entering a river in Ennis late on Thursday night.

Clare Civil Defence volunteers spent most of yesterday searching the River Fergus in Ennis after a male was observed entering the water at a bridge in the town centre at around 11 o’clock on Thursday. After the alarm was raised a major multi-agency search and rescue operation was quickly mounted.

It’s understood that passing Gardaí deployed life-buoys in an effort to rescue the man. Despite the best efforts of Gardaí, the man was quickly taken downstream in the strong current. The River Fergus is currently quite high and fast moving following recent heavy rain in the county.

Fire service swift water rescue technicians (SRTs) deployed their inflatable rescue boat and commenced a search close to where the man was last seen. Clare Civil Defence also launched a boat and carried out a comprehensive search of the river.

The crew of Rescue 115 used the helicopter’s powerful search lights to scour the river for any trace of the man. The search was later stood down for the night but resumed early on Friday.

On Friday, Civil Defence volunteers completed a search of the River Fergus from Ennis to Clarecastle with no trace of the missing man being found. Volunteers travelled up and down the river several times but were stood down at around 3.00pm.

The search resumed this morning with divers from four sub aqua clubs volunteering their time to assist in the search. Divers from the recovery units of Ennis, Burren, Kilkee and Lough Derg Sub Aqua Clubs, all affiliated with the Irish Underwater Council (Diving Ireland), arrived early today to offer their assistance.

Clare Civil Defence launched two rescue boats and have been transporting divers to search sites on along the river while also providing safety support.