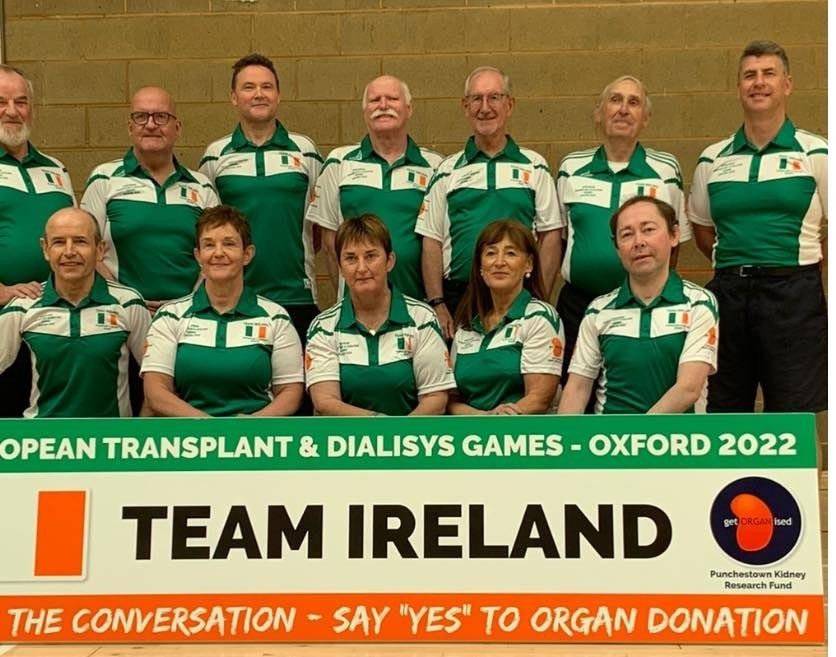 Lahinch’s Marie O Connor along with 12 other athletes from Dublin, Kildare, Cork, Tipperary, Galway, Clare and Roscommon will participate in The European Transplant and Dialysis Games to be held in Oxford UK from Sunday August 21st to 28th.

Along with her fellow athletes from Transplant Team Ireland, Marie will take part in the week – long multi-sports competition amongst Heart, Lung, Liver, Kidney, Pancreas & Bone Marrow transplant recipients and kidney dialysis patients from over 25 countries.  The Irish team of 10 men and three women consist of 9 Kidney recipients, 2 Liver recipients, 1 Double Lung recipient and one on currently Dialysis.

Marie received her kidney in 1998 and this was her second transplant.  She has attended and medalled at several Games over the years including Slovenia, Bangkok, Canada, Krakow to name but a few. Marie stoically says I don’t go to the Games for the Gold medals because I got that when I received my Transplant.

Instead, she competes to honour her donor and the donor’s family. Marie loves meeting new people and sharing stories and has made many new friends. She acknowledges that attending the Games is a commitment both financially and in other ways for all the athletes and supporters but they do so to honour their donors and to promote Organ Donation.  Marie will take part in the Team and Individual Golf competitions and also in Petanque and 100 metres individual & relay. She is looking forward to meeting up with old and new Team Ireland colleagues, and friends from other national teams in the ETDG 2022 in Oxford.

The Team recently had their official Team Kit Launch with Olympian Michael Carruth sharing his advice with Transplant Team Ireland at Kilcullen Community Centre. It was inspirational to hear Carruth  speak of his passion, drive and unrelenting ambition to win the Olympic medal, beginning when he was just 7 years old. His advice included ‘don’t give up’ after failure, or when everything seems to be against you and repeated don’t believe naysayers who tell you that you can’t achieve what you want because he proved them wrong. He spoke of his encounter with George Foreman at his first Olympics when things didn’t go so well

But what is really astonishing is that Carruth actually fought his 1992 Olympic final with two broken hands – defeating Cuban boxer Juan Hernandez Sierra and taking home Ireland’s first gold medal since that won by runner Ronnie Delaney at the 1956 Games in Melbourne. It was a personal, intimate account of his challenges to the final and one that each athlete present could relate to – the need to believe in yourself, the necessity of good support around you and the driving passion to succeed.

Transplant Team Ireland also fondly remembered members of Transplant Team Ireland who have passed away since the last Games and family members were present to accept a Team Jersey in honour of their loved ones. They were told that this was a loss for the whole ‘transplant family’ and it was poignantly noted that they were to be ‘honorary team members’ in Oxford.

Like all their colleagues in Team Ireland, Marie competes to honour their donor and the donor’s family. Transplant Team Ireland stories are inspirational ones – of facing adversity head on and valuing the most precious gift of all – Life. Team Ireland showcases the success of organ donation and transplantation whilst offering inspiration to those who are newly transplanted or newly diagnosed with organ failure. To keep up to date on Team Ireland’s progress, visit transplantsportireland.ie and their corresponding social media platforms linked from the website.

The Team have one simple request to everyone – to please consider carrying an Organ Donor Card and Have the conversation – Say YES to Organ Donation.