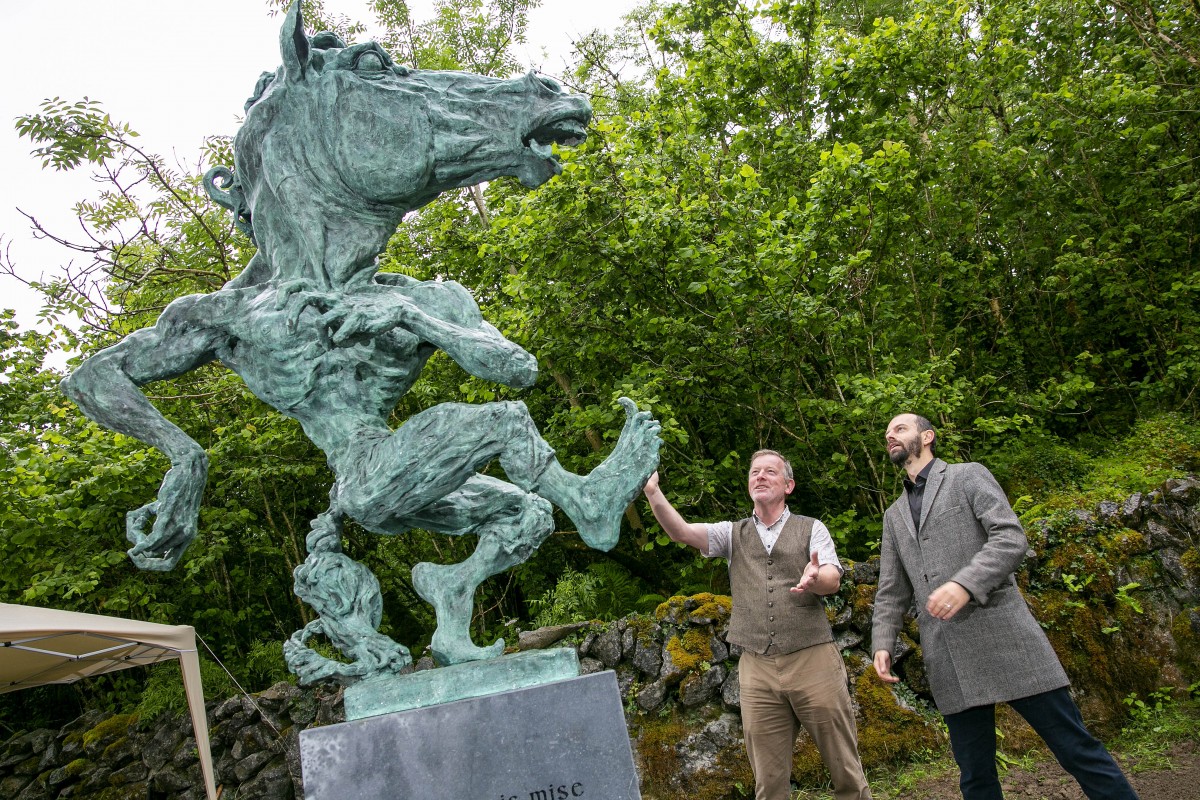 The Burren community in North Clare gathered at the Michael Cusack Centre, the birthplace of the founder of the GAA, this afternoon for the official unveiling of the Púca.

Inspired by Irish folklore and the locality’s equine heritage, the 2m-tall bronze art piece is expected be a significant draw for visitors to the visitor attraction.

The Michael Cusack Centre in Carron, which is located in an area historically named ‘Poll a Phúca’ or ‘Lair of the Púca’, was selected as the artwork’s home following an expressions of interest process managed by Clare County Council.

Dónal Ó hAiniféin, Chair of the Board of Michael Cusack Centre, commented, “We are delighted to be selected to host the Púca. Tá áthas an domhain orainn go bhfuil an Púca ag filleadh abhaile go Poll a’ Phúca. We are thrilled that the fantastic Púca artwork is coming home. The Michael Cusack Centre is a most appropriate setting for this magnificent figure.”

Mr. Ó hAiniféin confirmed that plans to develop an annual event celebrating the Púca are at an advanced stage.

“The annual Samhain / Púca Storytelling Festival on November 1st will celebrate the folklore around the Púca with a programme of events ranging from the academic to children’s art,” he explained.  “The inaugural event later this year also will coincide with the 175th anniversary of the birth of Michael Cusack here in Carron.”

Artist Aidan Harte, who was commissioned by the Arts Office of Clare County Council to produce the artwork, said, “I want to thank the people of Carron and the Burren for making this scallywag welcome. I couldn’t pick a better backdrop. The Púca has come home. A wild place for a wild thing.”

Commenting about his first piece of public art, the Kilkenny artist described the Púca as one of Irish folklore’s great characters.

“Douglas Hyde, the first President of Ireland (1938-45), described ‘a terrible steed’ carrying mortals to fairyland on his back,” he said. “Catch him in the right mood, said Hyde, and the Púca tells fortunes and grants wishes. People who never heard these stories want to know if the Púca is bad or good. He’s neither. Like the rest of us he’s inconsistent.”

Leonard Cleary, Director of Rural Development with Clare County Council, described the Michael Cusack Centre as “a fitting home for the Púca and will add value to both the installation and the community-run visitor attraction.”

The Púca was originally commissioned by the Local Authority in 2021 as part of a capital project investment to increase visitor dwell time in Ennistymon and further enhance the overall appearance of the town. Following extensive consultation with Elected Members and the local community, a public survey on the Púca and its proposed location influenced the decision to relocate the artwork elsewhere in North Clare through an Expression of Interest process held in early 2022.