A new school building for Scoil Chríost Rí, Cloughleigh is one step closer this week with the project proceeding to tender.

Builders are expected to be on the site of the Cloughleigh school in June to demolish 1,600 square metres of the existing building and commence work on the construction of the new primary school. The school’s new extension will be the only part of the old school maintained with a two storey school building and twelve extra classrooms to be built.

A general purpose hall, support teaching spaces and ancillary accommodation, will also be constructed. The school grounds will also be improved and will include cycle storage, bin stores, ball courts, project gardens, external storage buildings, landscaping and boundary treatment and all other associated site development works. The works to the remainder of the site will consist of the provision of 32 car parking spaces, and drop-off and pick-up facilities.

Minister of State for Small Business and Employment, Pat Breen outlined what initially delayed the project. “Scoil Chríost Rí, along with the CBS in Ennis, is part of the DES Rapid School Building Group Scheme, and as such is to be fast tracked for funding for an essential new school building. The Cloughleigh school was granted planning permission last August, however the building process was delayed as the CBS was not granted planning permission at the same time. However after discussions with the Department of Education it was decided this week to allow Scoil Christ Rí to proceed to tender on its own”.

Breen added, “I am satisfied that this project is now progressing as the current school environment is wholly unsuitable for both the students and staff. I understand also the frustration of the CBS school which is also part of the DES Rapid School Building Group Scheme and the five year School Buildings Programme, but remains at planning stage”.

Meanwhile a grant has been approved for the provision of an additional classroom at Cratloe National School. 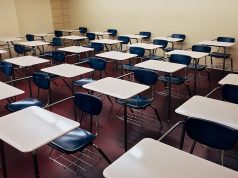