The Bunratty International Chess Festival brings some 400 competitors from over a dozen countries to the county Clare village this weekend.

The event, now in its 26th year has grown to become the strongest weekend chess tournament in the world regularly attracting global stars such as Nigel Shortt, Pytor Svidler and Wesley So.

Players and fans mix freely in a convivial atmosphere and the famous Bunratty blitz on the Sunday night is an open to all lightening chess competition where club players can find themselves up against the very best in the world.

Cllr Michael Begley, Cathaoirleach of Clare County Council will present the prizes to the winners of this year’s Bunratty International Chess Festival on Sunday.

The prize giving ceremony is scheduled for 6pm on Sunday in the Bunratty Castle Hotel. 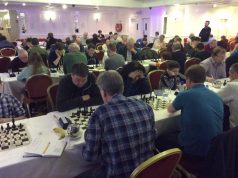