A man has died in hospital after he was injured in a fall at his home in Co Clare yesterday.

It’s understood the man in his early 70s suffered serious injuries after he fell from a ladder while working at his home at Caherush near Quilty. The incident is believed to have occurred during the morning while the alarm was raised at around midday.

The man, named locally as bachelor Michael Mungovan, was discovered by a neighbour who raised the alarm. It’s not known how long he had been lying injured on the ground before he was found.

National Ambulance Service paramedics rushed to the scene and after assessing the man, requested a helicopter to airlift the man to hospital.

Helimed-92A airlifted the man from Quilty and had originally planned to transport him to University Hospital Limerick however shortly before they were due to land there, it was decided the gravely injured man be flown to Cork instead.

The helicopter landed at a site in Bishopstown from where the injured man was transported by road ambulance to Cork University Hospital where he was later pronounced dead.

A post-mortem will be carried out while it’s understood that a file will be prepared by Gardaí in Cork for the County Coroner there as Mr Mungovan died in Cork. 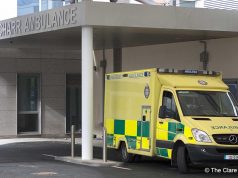