The Lough Derg RNLI lifeboat was launched yesterday to assist 3 people on board a 36ft motor cruiser that had run aground north of the entrance to the Scarriff River in East Clare.

Watch officers at the Irish Coast Guard’s marine rescue sub centre on Valentia Island in Kerry requested the Lough Derg RNLI lifeboat to launch to assess a cruiser reported aground by a concerned member of the public. The cruiser was said to be in Scarriff Bay, north of the entrance to the Scarriff River.

The lifeboat launched shortly before 7.00pm in calm conditions and good visibility.

At 7:08pm the lifeboat arrived on scene to find the cruiser aground on a rocky shore, north of the entrance to the Scarriff River. The lifeboat stood off to inspect the aspect of the cruiser, which appeared to be pivoting on the edge of the shoal.

Taking a transit off their stern, and with a volunteer RNLI crew taking soundings off the bow, and another using the on-board electronic charts, the lifeboat made a cautious approach to the casualty vessel. There was a family of three on board, all safe and unharmed and wearing their lifejackets. An RNLI crew member transferred across to the casualty vessel and established that the vessel was not holed.

Crew took soundings around the casualty vessel, and given the isolated location, the helm decided that the safest option was to set up an astern tow and take the vessel of the rocks and out into safe water.

At 7.20pm the lifeboat had the vessel off the rocks and out into safe water, where drives and rudder were found to be in good working order. The RNLI volunteer was transferred back to the lifeboat, and the cruiser and her passengers continued their onward journey to Scarriff Harbour.

Jeremy Freeman, Deputy Launching Authority at Lough Derg RNLI, advises water users to ‘keep a lookout and anticipate each navigation mark on your route and always carry a means of communication’. 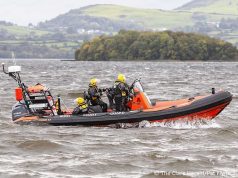