The Irish Coast Guard has reported an 12% increase in the overall number of incidents coordinated during 2021.

The Coast Guard has thanked the public for their cooperation and support during the year including the positive response in adhering with severe weather warnings and extends best wishes for a SAFE 2022.

In terms of overall service delivery, the Coast Guard highlights a category of Lives Saved, defined as assistance provided that prevented loss of life, severe risk to life, or protracted hospitalisation. In 2021, the Coast Guard recorded that 474 individual responses were categorised as Lives Saved.

One of the more notable incidents of the year was the successful evacuation by the Waterford based Coast Helicopter (R117) of seven crew members from a fishing vessel that sunk off the South West coast in March. This operation, which was supported by Naval Service and RNLI resources, resulted in the presentation of national bravery awards to the four helicopter crew. In addition, R117 crew member Sarah Courtney, was awarded a silver medal for her role and actions as ‘winchman’ in the most challenging of weather conditions.

Acting Coast Guard Director Eugene Clonan said that since March 2020, the key challenge has been to ensure the 24/7 delivery of Coast Guard SAR services, as coordinated by the three Rescue Coordination Centres in Malin Head Co Donegal, Valentia Co Kerry and MRCC Dublin, supported by our engineering team, and responses delivered by the Coast Guard’s own volunteer sector, its contracted Helicopter service, RNLI and Community Inshore Rescue services, in addition to support provided on a request and availability basis by Naval Service and Air Corps.

“We are indebted to the men and women that make up our SAR community, for the discipline and commitment they have demonstrated in facing the challenge presented by Covid and in maintaining service availability throughout the year.”

The Coast Guard was notified of a total of 68 drownings in 2021 a reduction of 7 on 2020 figures. Coast Guard works closely with Water Safety Ireland (WSI), in monitoring drowning risks and trends, and supports WSI in compilation of drowning statistics.

Public safety messaging continues to be promoted via the www.safetyonthewater.gov.ie website and other social media platforms, in conjunction with stakeholders from the Marine Safety Communications Sub-Group (Coast Guard, Water Safety Ireland, RNLI, Bord Iascaigh Mhara, Met Éireann, Commissioners of Irish Lights and Irish Sailing). The Coast Guard actively participates in the development and promotion of the Government initiatives to provides seasonal safety information to the public via the ‘Be Winter Ready’ and ‘Be Summer Ready’ campaigns. The theme of the 2021 Summer campaign was ‘Be Alert to Water Safety’ 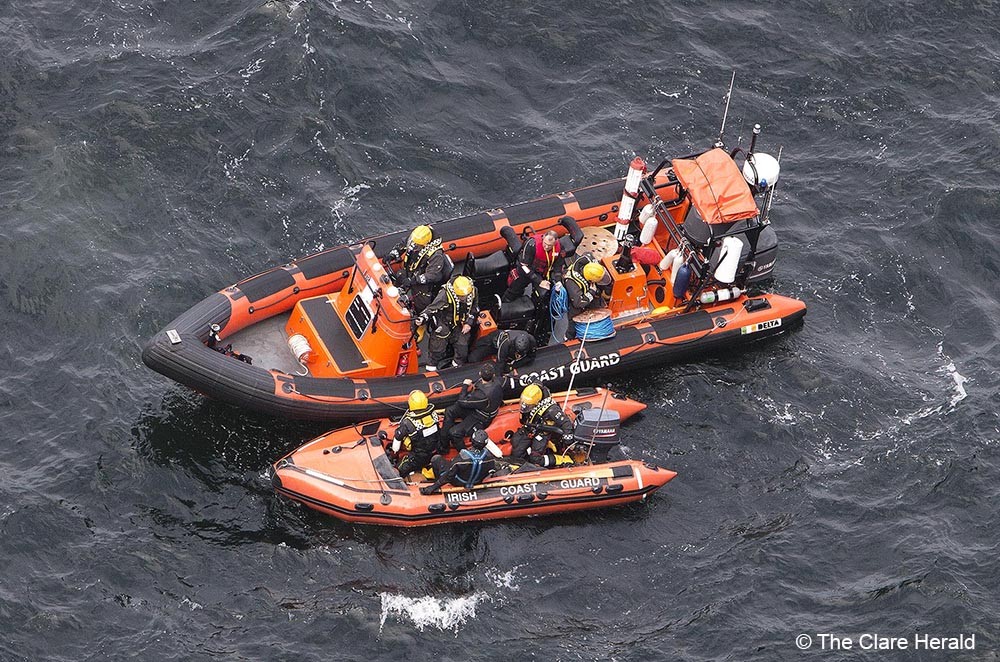 Volunteer Coast Guard units provide a combination of Rescue Boat, Cliff Rescue, Shoreline Search Capabilities, and Emergency Community Support in conjunction with the other emergency services. The 44 units were tasked on over 1,400 occasions during the year. Further development in the use of Small Unmanned Aircraft systems (Drones) provide Coast Guard units with an enhanced search capability.

Coast Guard helicopters provide day and night services out of four bases (Dublin, Waterford, Shannon,  Sligo) and were tasked to a total of 886 missions in comparison with 794 missions in 2020. These services include day and night aeromedical support to the island communities, of which 188 flights were provided, as well as inter-hospital transfers and helicopter emergency medical support to the HSE. Coast Guard helicopters also assist An Garda Síochána with inland search operations including collaboration with Mountain Rescue Teams in assisting people who experience difficulty on isolated terrain. 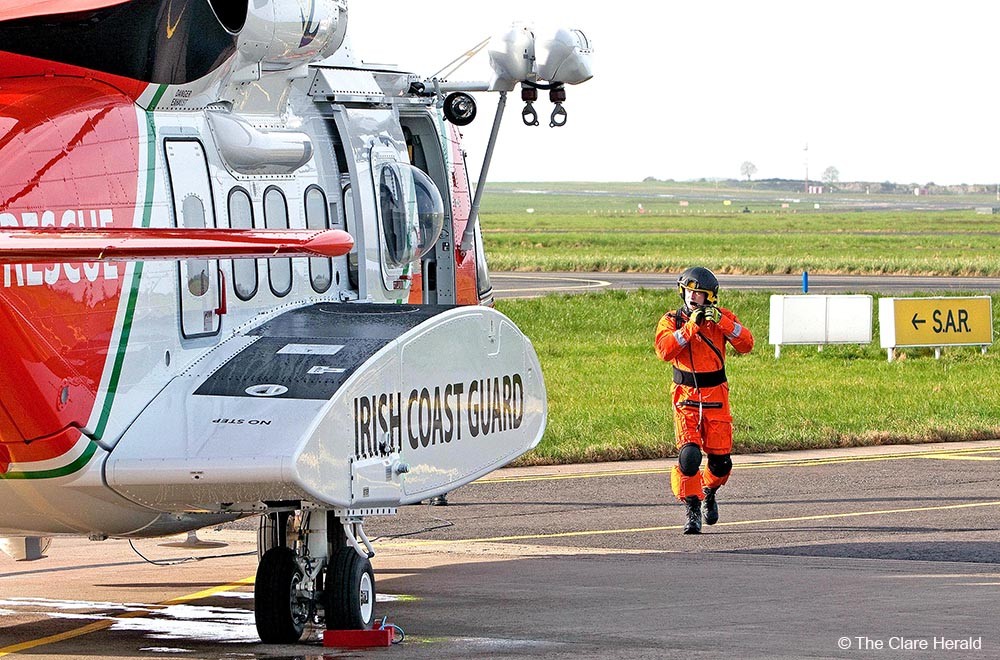 The RNLI is categorised as a declared resource to the Coast Guard, which means that each individual station can be directly requested to respond to individual incidents. RNLI lifeboats were tasked on 911 occasions while Community Inshore Rescue Boats services participated in 117 different incidents.

MRCC Dublin serves as the national single point of contact for processing of COSPAS-SARSAT 406 MHz Satellite Beacon Alerts generated by Irish registered beacons worldwide (EPIRBs (Emergency Position Indicating Radio Beacon); PLBs (Personal Locator Beacons) and ELTs (Emergency Locator Transmitters), including any beacon alerts from foreign flagged vessels or aircraft operating within the Irish SRR (Search & Rescue Region). During the year, a total of 171 satellite beacon alerts were processed, many of which were the result of accidental activations or false alerts due to incorrect disposal of beacons. The Coast Guard continues to highlight the importance for all mariners, including the recreational community to have a means of communications before going afloat.

During 2021 the Coast Guard conducted two major inter – agency emergency exercises, titled ‘Blue Mist’ in April off the East Coast and ‘Blue Kingdom’ in September off the South West Coast. Both exercises required a multi-agency response led by the Coast Guard in conjunction with other Emergency Services, Local Authorities and other supporting organisations. These exercises promoted inter agency coordination and tested overall capacity to respond to major emergencies relating to the National SAR Plan and the National Maritime Oil Spill / HNS Spill Contingency Plan.

The capacity to Raise the Alarm and Stay Afloat, are central to the prevention of drownings at sea or on inland waterways. The Coast Guard’s core safety message Stay Afloat – Stay in Touch; highlights the importance of never engaging in any commercial or recreational boating activity without wearing a fully serviced Life Jacket or Personal Flotation Device (PFD), coupled with a capacity to raise the alarm via means such as a VHF radio, Personal Locator Beacon, EPIRB or mobile phone.

This should be supported by informing shore-based colleagues of intended activity and anticipated return time. Mobile phones should not be considered as a suitable substitute or be relied upon as the only means of emergency communication at sea. Phone coverage at sea is limited and unreliable. Mobile phones are also highly susceptible to failure due to water ingress. 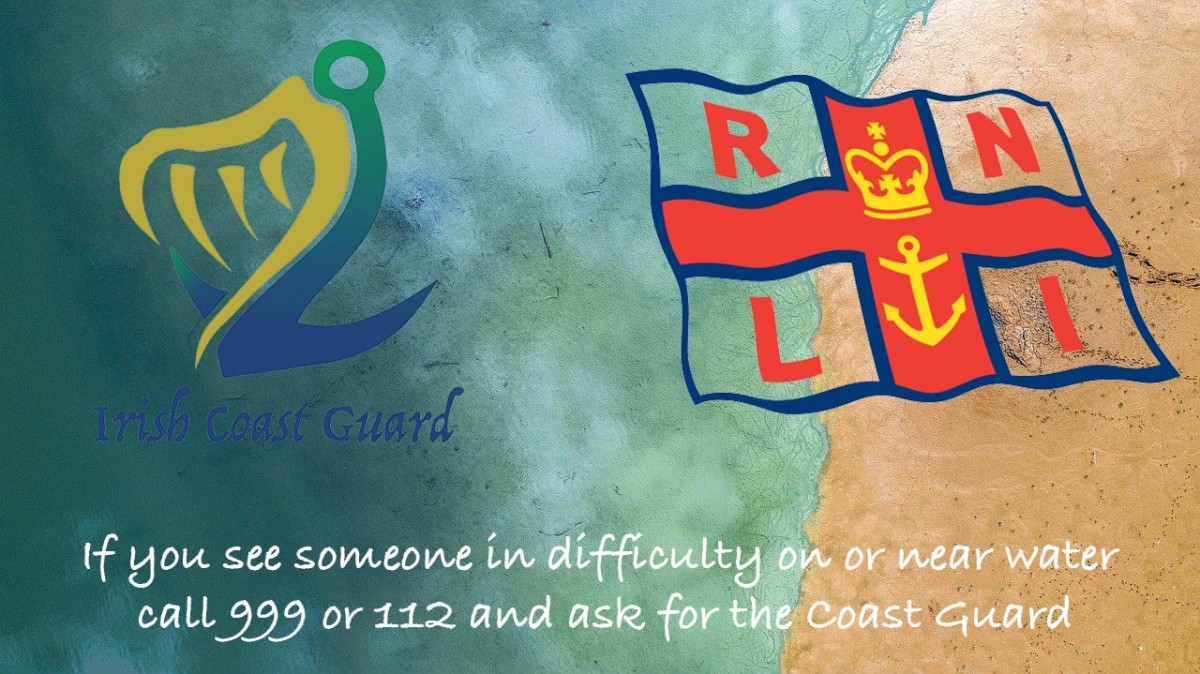