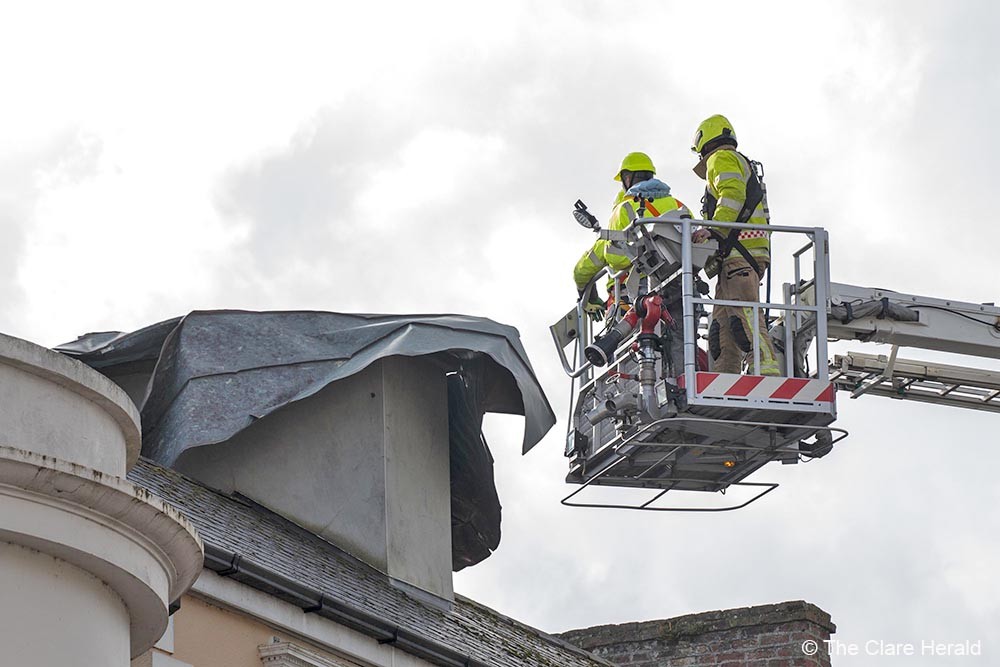 A section of Ennis town centre was sealed off this afternoon in the interest of public safety after a large sheet of metal was discovered in dangerous position on the chimney of three storey building.

It’s believed the sheeting, thought to be copper roofing and weighing about three quarters of a tonne, was blown off the roof of nearby building where works are being carried out. This is thought to have occurred over the weekend when two storms hit Co Clare.

The sheeting may have been on the roof at High Street since Sunday and only spotted on Wednesday morning. Workers from the building site realised a section of the roof they had been working on was missing but it was nowhere to be seen.

When the sheet was spotted this morning, units of Clare County Fire and Rescue Service from Ennis station and local Gardaí responded to the scene and soon realised the seriousness of the situation.

A larger section of the sheet, which couldn’t be seen from the street, was left hanging down the rear of the roof also. The sheet was left flapping on the rooftop as high winds affected the local area.

Members of Clare Civil Defence launched a drone to carry out a visual inspection of the roof while fire crews deployed a hydraulic platform and lifted workers from the nearby building site up to the roof so they could carry out their own assessment of the situation.

In the meantime, O’Connell Square, High Street and Bank place were sealed off to traffic and pedestrians during what was deemed a ‘potentially serious incident.’ Winds in the area were also dangerously strong raising fears the sheet could be blown off the roof in any direction at any time.

Fire crews secured the sheet with straps before it was lifted by crane onto the street below when the size of the sheeting only became clearer. Workers then measured the sheeting to ensure it matched the section that was blown off the nearby worksite and that no other part of it was missing.

One local businessman said: “I spotted it yesterday but was sure the chimney was damaged and was covered in plastic sheeting. I never thought it was a huge sheet of metal. It was just flapping away You can see how windy it is here today. It could have gone anywhere.”

Onlookers watched from behind the cordon for over an hour as efforts to remove the sheeting took place. Even as the sheeting was lower from the roof it was tossed around by the wind but the sheet was placed safely on the street for inspection and removal.