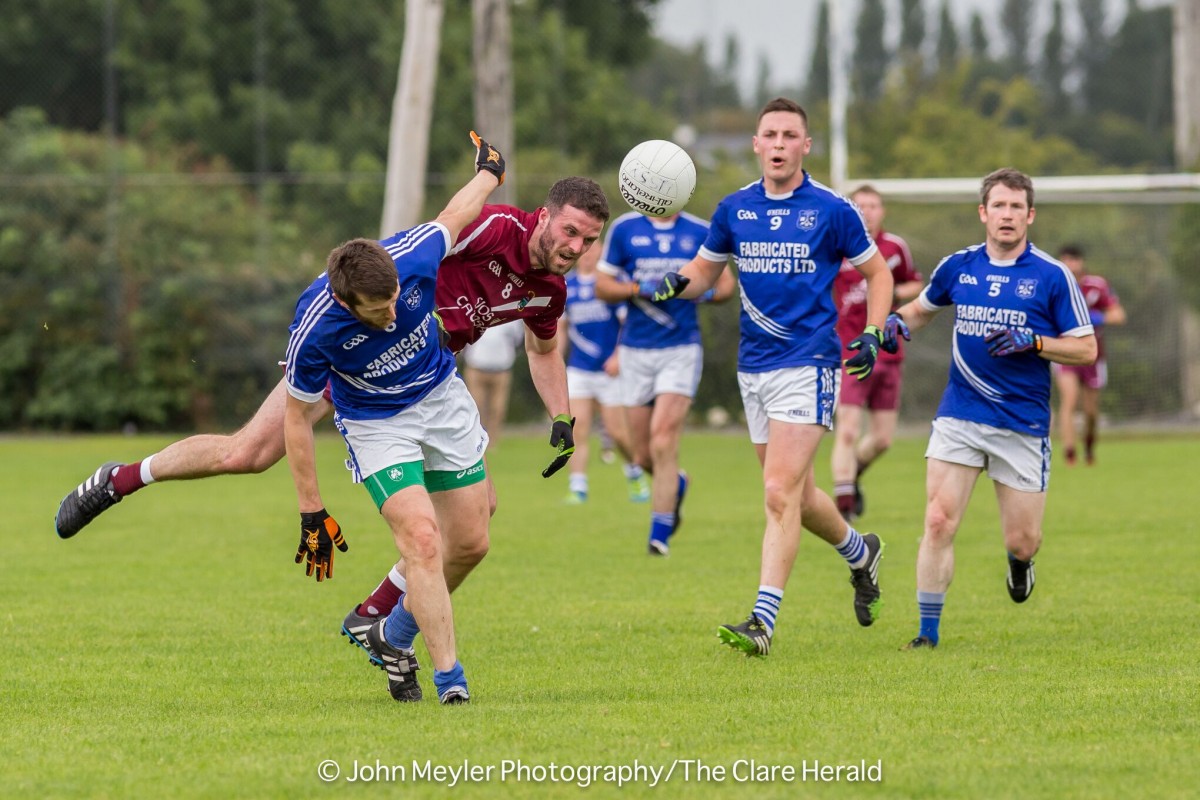 2014 Champions Cratloe advanced to the last four of the Clare SFC when they held out for a six point win over Ennistymon.

Realistically six points is not a fair reflection of the difference between the teams or of the game itself. A cool head was needed in this encounter and Cratloe were the side to provide it. At one stage in the contest they found themselves trailing by two points but less than minutes later they turned the game on its head to five point advantage, this was late in the first half and was pivotal in their victory.

Cathal McInerney would finish the hour with 1-06 and was the first man to register a score. It was the consequence of good teamwork with Antoin McFadden, Oige Murphy, Sean Collins and Conor McGrath all contributing in setting up the UL graduate for the opening score of the game.

Cratloe went the following fifteen minutes without a score as Danny Rouine on the double and Kevin Hehir put Ennistymon in front. Points from the Collins brothers David and Sean had the sides on level terms with twenty two minutes played, they regained the lead in the next attack as Conor McGrath danced past his opposing defenders before splitting the posts.

Conor Cooney raised the first green flag of the tie on twenty four minutes as his effort trickled past Padraig Brennan to put Colm Collins’ men in control. Rouine and McInerney traded frees as David Collins kicked over the final score of the half to give Cratloe a five point advantage at the break as they completely turned the game in their favour.

Both sides added two scores each inside the resumption with the general mood suggesting Cratloe were going to dominate the rest of proceedings. However David Fitzgerald sprung the game back into life on forty one minutes when he kicked to the back of Pierce deLoughrey’s net to cut the gap to two points. The Magpies built on this with a superb long range effort from Enda Ralph.

McInerney and Rouine added two scores each to leave just the one point between them with five minutes remaining. Cratloe missed two very scoreable chances in a row which gave rise to the view that Ennistymon may just nick this one. It wasn’t to be as the 2014 champions upped it another gear with points from McInerney, McGrath and Conor Ryan while David Davenport opened his account late on.

In a late Ennistymon attack with all their men forward Oige Murphy made a vital interception and picked out the Cathal McInerney who was all alone with just Padraig Brennan to beat and that he did to seal the win.

It was far from convincing from Cratloe who are a bit off their peak. To win while playing below your standard is always a positive. All six of their forwards scored and if they can do this everyday they will be in with a shout. Their defence was solid with only two points from play leaked by their six backs.

Midfield is the big area they need to work on if they’re to claim the Jack Daly. On top of that their shooting was not at their normal levels but they still have Podge Collins to return for the semi-final. Oige Murphy, Cathal McInerney, Conor McGrath, Sean Collins and Liam Markham stood out for the winners.

Four points is all Ennistymon could score from play in sixty minutes and the figure is never going to win a championship quarter-final. Not enough ball was supplied to their attackers who were very impressive in their Round Three win over St Breckans. They were careless at times when in possession with concentration letting them down, once they lost the ball they failed to react quick enough to try and win it back.

Reaching a quarter-final for two years in a row is a plus but for the side to really develop and prove themselves they need to be making the last four. Young players are making the step-up for the Magpies but putting together a consistent campaign is what’s needed to see them fulfil their potential. Adam Ralph, David Fitzgerald and Joey Rouine did well for Ennistymon.