Not only has Donal Óg Cusack’s addition brought a new lease of life to the Clare Senior Hurlers but he has only helped Davy Fitzgerald to alter his perspective on life and the game of hurling.

Speaking ahead of Sunday’s crunch Munster Championship semi-final, Fitzgerald stated that he didn’t enjoy the historic 2013 All-Ireland win as much as he should of. “I didn’t actually enjoy the All-Ireland, because I knew what was coming. When you are up there, there’s only one place you are going to go and you are probably going to get kicked left right and centre and I knew that.

“I have regret; I should have enjoyed it way more. That’s why I enjoyed the League (win). I made a decision at the end of last year. I was getting kicked left right and centre in certain places.”

Across the hurling spectrum Davy has been praised for the changes made to his management team. Bringing Cork man Donal Óg Cusack on board has forced the Sixmilebridge man to reassess his outlook on the game. Dónal Óg actually said to me; ‘boy, you’ve done everything, what are you at?’ I was thinking, let’s enjoy it.”

When discussing the wider scheme of things, Fitzgerald believes people need to live their lives more and appreciate what they have. “People will have this thing that I will be roaring and shouting in the dressing-room and driving them mad. No! There is a lot more to life. Let’s really look at what is happening around us. There are big problems out there. There are problems with health, people who are very young struggling with health. Feckin’ hell. We are going out playing a game of hurling. The bigger the day the better”.

“Go out and perform, and if you make mistakes? We made mistakes the last day and it nearly cost us. I guarantee, not one thing was said to those players about making a mistake. “It might happen the next day. If they give me everything and we walk in having left every single ounce outside there, I am telling you there will be handshakes from Clare and fair play, but Jesus, it is not a big deal.

“We will be doing everything and will be disappointed for a few hours. But life is a funny thing and I don’t think we appreciate it enough.

Clare are often criticised for the amount of staff in their backroom team, the two-time All-Ireland medallist says it’s important to surround himself with positive people. I have fantastic people around me in Clare, I love them. I have a great bunch of guys that stood by me. And you know, I just made up my own mind to stay inside that”.

Looking at the tactical side of things, Davy is adamant it’s going to be one of their biggest battles. “You’re looking every two seconds, how are our match-ups, are they playing that cordon? They have this thing where the play a cordon across the middle of the field, where they’re nearly touching hands. I know philosophies are out there: Pep Guardiola feels that if you win at midfield, you win the game. I know they think like that and we would probably be the same”.

He continued “Would we naturally set up the way we set up for the last two games? No. But when you have so many bodies across the middle, if we were to leave them loose, they’re going to go point, point, point. They’re a savage team to work a quick pass. I remember watching tapes of them for months, they could have the ball over on this side, four to five passes and they’ll score on the other side. They’re so quick at moving it and that’s why it’s crowded. The middle third is everything. It’s like dog eat dog out there, this is nearly wolf on wolf.”

Recent reports say it will be unlikely that the match attendance for Sunday’s game will be more than 25,000. The Clare boss is hopeful a large crowd will be present for a game he feels they won’t be able to keep their eyes off. “And people say we scraped over last time. Great. Please God there will be 30 or 40,000 there. I love the idea of playing Waterford again. They are a really strong team. They are tactically good. Their lads are hungry. It will stand to whatever team wins it. It is going to be wicked intense out there. I think you can expect that kind of atmosphere. There will be two very hard-working teams and not much space to breathe. There will not. You will be watching everything all day.”

Now in his fifth year as Clare Senior Hurling manager, Fitzgerald is all about improving the history of the County. “When I think back on it, Clare wouldn’t have been a historic county (in hurling terms). I’ve been so lucky. I’ve got to play on the biggest days, I’ve got to win on the biggest days and I’ve got to win everything as a manager. No matter what happens for the rest of the year, nobody can take away from the fact that Clare won their first National League title in 38 years. I take that very seriously”. 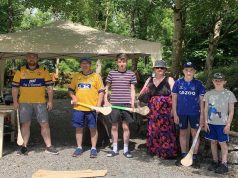