Western Ireland is set to be the focus for Tellus, a geological mapping project which collects geophysical and geochemical data on rocks, soil and water across Ireland.

With soil and stream sampling already underway in Mayo, ground teams are set to continue their geochemical surveying activity in the county and into north Clare and west Galway visiting over 5,000 locations across the summer and autumn months.

Surveying by Tellus will provide an up-to-date, comprehensive picture of the geology of the region with the aim of delivering long term economic, environmental and agricultural benefits. Data, which will be released publically, will also allow for the modernisation of geological maps for planning and research purposes, improve radon risk mapping and promote local mineral exploration.

The Tellus team, led by the Geological Survey of Ireland and funded by the Department of Communications, Energy and Natural Resources, expect to have surveyed 50% of the country by late 2017.

Minister for Natural Resources, Seán Kyne TD, explained the significance of the initiative. “Tellus has already unearthed significant discoveries in relation to the geological composition of Ireland – from precious metals in the streams and rivers of south east Ireland to buried volcanoes along the Westmeath and Offaly border. The forthcoming phases of the survey will continue to use the latest technology to delve deep into the environment and natural resources of the west of Ireland. The resulting data will offer widespread benefits which will support the protection of public health, agricultural productivity and the assessment of natural resources.”

To gather data the Tellus project has commissioned an aircraft equipped with the latest geophysical technology, which surveys rural areas at a height of 60m – approximately eight times the height of a two storey house. The aircraft is a white twin propeller plane operated by the specialist survey company, Sander Geophysics Ltd and is easily identified by its red tail, black stripe and registration number C-GSGF. The airborne survey will operate safely within Irish Aviation Authority permits, however, the sound of the plane flying overhead is similar to that of a passing lorry and could startle young animals and sensitive livestock, such as horses, pedigree cattle and poultry flocks.

Members of the geochemical sampling team operated by OCAE Consultants Ltd. – who work in pairs and carry identification – will meanwhile collect samples at regular intervals across the area which is renowned for its complex geology and diverse landscape. Permission to sample land will be sought on the day of sampling, and co-operation from landowners is appreciated.

Communicating with the local community is a priority for Tellus, said Mairead Glennon, Project Manager. “Tellus operates an extensive communications programme to inform the public of survey operations. We are in close contact with the local community in the area to make sure that people and animals on the ground are not disturbed by survey operations. We would like anyone who has concerns about the low-flying aircraft in relation to sensitive animals to get in touch through our information line on Freephone 1800 303 516”. 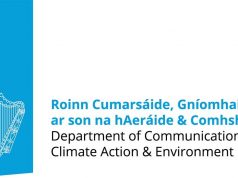