Lahinch Golf Club is once again playing host to the South of Ireland Golf Championships which is now in its 115th year.

One hundred and fifty golfers took part in the qualifying process of the competition. The Championship format sees the leading 64 competitors from the 36-hole stroke play qualifier, played over the first two days (Wednesday & Thursday), qualifying for match play over the weekend.

Twenty one year old Jack Whelan of Newlands was the leader on the first day of the qualifiers firing a four under 68. Shannon’s Daniel Brennan was the best of the Clare golfers as he stood in twenty fourth position after Wednesday’s qualifiers, Tony Cleary of Woodstock Golf Club is also in contention. 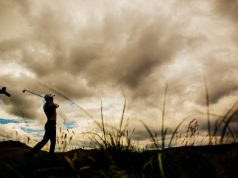