Over 600 pupils, from both primary and secondary schools, including Co Clare, gathered in the Pavilion at Leopardstown racecourse in Dublin to attend the presentation of An Ghaelbhratach.

The Gaelbhratach scheme, funded by Foras na Gaeilge, and organised by Gael Linn, with the support of Conradh na Gaeilge and Glór na nGael, recognises the promotion of the Irish language in both secondary and primary schools around the country.

Among the schools being awarded the flag was Kilmihil National School. Students Edel Ní Chonamara and Jennifer Ní Choileáin proudly accepted the flag on behalf of their school.

Students Eoghan Ó Máirtín and Orianna Ní Dhuibhir accepted the flag on behalf of their school, Coláiste an Rísigh, Inis.

The Gaelbhratach scheme, initiated in 2014 has gone from strength to strength. Over one hundred schools will be taking part in the scheme next year and this year’s event recognised the Irish language achievements of over 60 schools.

Some teachers present agreed that there was a great deal of work involved in getting to the stage where they were awarded the Gaelbhratach as many of the targets they had to reach were quite challenging. However, the Gaelbhratach committees within the schools came up trumps and were really proud to be on stage receiving the flag on behalf of their schools. 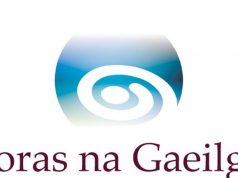