A plaque has been unveiled at Dysert O’Dea Castle, Co. Clare, designating it a Clans of Ireland Historical Site.

It was unveiled by Dan McGrath, Clans of Ireland Historical Sites Committee Chairman, and Joan Koechig (USA) Chieftain of the O’Dea Clan, who had been inaugurated just prior to the unveiling.

The event coincided with the 10th International O’Dea Clan Gathering in nearby Ennis and the commemoration of 700th anniversary of the Battle of Dysert O’Dea.

There was a large crowd present for this historic occasion, including several members of the O’Dea Clan from around the world, who had gathered in their ancestral county of Clare for the O’Dea Clan festival of heritage, genealogy and culture.

Speaking at the unveiling of the plaque, Dan McGrath acknowledged the great work being carried out by Irish Clans, outlining the value of gatherings such as the O’Dea Clan Gathering in linking Ireland with its diaspora. He highlighted the tremendous efforts of the various clan committees around the country who host gatherings, the vast majority of the work being done on a voluntary basis.

Before he ended, Mr McGrath praised the work of three people who played a huge role in organizing the event, Shane O’Dea, James O’Dea and Karen Dwyer. He wished the O’Dea Clan every success and said that he was ‘delighted to be present to unveil the plaque at Dysert O’Dea Castle on behalf of Clans of Ireland on such a special occasion, commemorating a key event in Irish history’.

Clans of Ireland is the independent permanent authority established in 1989 to authenticate and register Irish Clans and historical families, to promote their interests at home or abroad and unite them into a cohesive cultural movement. 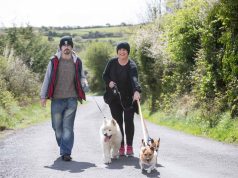