A Garda investigation is underway in Co Clare after the discovery of a car in a lake sparked a major search and rescue operation.

The alarm was raised at around 5.45pm when Gardaí received a report of a vehicle in Lake Inchiquin near Corofin.

On arrival at the scene, local Gardaí used a fishing boat to make their way out to the vehicle which was submerged about 30 metres from the shore. One officer broke the rear window and sunroof to check whether there was anyone inside.

In the meantime, units of the fire brigade from Ennistymon and Ennis, and their respective water rescue units, raced to the scene along with an ambulance and additional Garda units. The Doolin unit of the Irish Coast Guard was also alerted and requested to make their way to the scene.

Coast Guard responders were stood down while on their way to the incident while ambulance paramedics waited at the lake until it was confirmed there was no casualty.

Fire crews managed to haul the car onto the slipway where Gardaí carried out a preliminary examination in an effort to identify the vehicle and its owner. The car has been removed for further technical tests.

Gardaí from Corofin are investigating the incident however it appears the car was intentionally driven into the lake. 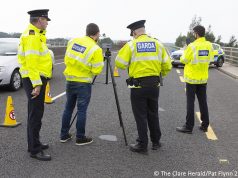 Speeding notices issued on National Slow Down Day in Clare