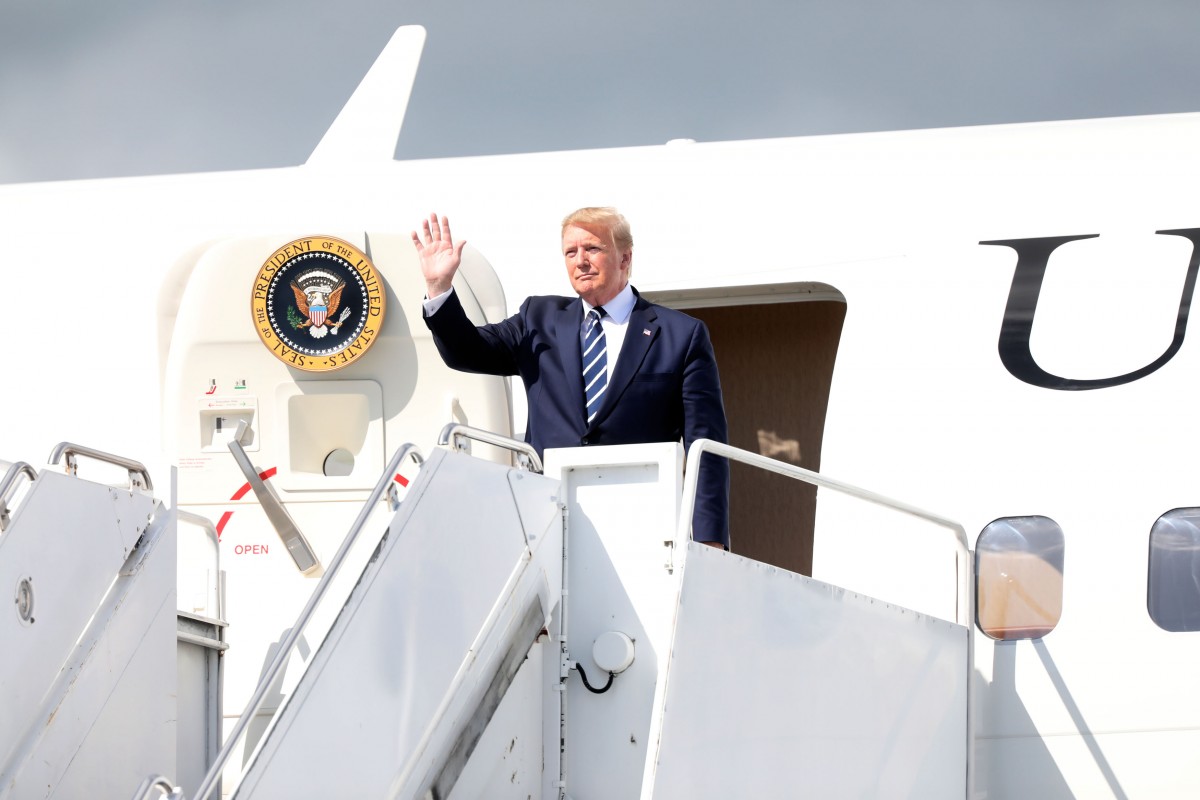 U.S. President Donald Trump arrived in Ireland on Wednesday and was met at Shannon Airport by Taoiseach Leo Varadkar.

The Taoiseach and US President held bilateral talks at Shannon before Mr Trump and his wife were flown by helicopter to Doonbeg where he will stay at his family-owned hotel.

Photos by Julien Behal (for Department of Foreign Affairs)

Meanwhile, there has been a mixed reaction to the visit of the US president to Ireland.

Peace and climate change campaigners have mounted what they’ve called a family friendly protest and peace camp at Shannon Airport while Donald Trump is here.

The main protest has been organised by local groups Shannonwatch, Extinction Rebellion Clare, and Futureproof Clare, and is supported by the Ireland Palestine Solidarity Campaign (IPSC), Gaza Action Ireland, the Peace and Neutrality Alliance (PANA) and the Irish Anti-War Movement (IAWM).

Edward Horgan of Shannonwatch said: “Trump’s greatest danger to humanity arises from two closely related areas. The first is climate change denial and wanton destruction of our living environment. The other is unjustified wars of aggression, motivated largely by the desire to steal other countries’ resources. Oil rich Venezuela and Iran are the most recent targets for Trump and the US.”

“The US military has become the world’s greatest destroyer of our environment, in addition to using up a huge proportion of the world’s scarce resources. And since 2002 successive Irish governments have allowed them to use Shannon Airport to do just that,” he added.

Aisling Wheeler of Extinction Rebellion Clare said: “We are opposed to Donald Trump visiting Ireland because he is a climate criminal. By taking the US out of the Paris Agreement, he has knowingly endangered the stability of our climate and consequently put the lives of millions of people at risk. Any world leader who is not taking decisive action to reduce their country’s emissions is guilty of criminal negligence. As an active denier of climate breakdown Trump has gone one step further and deliberately sabotaged the kind of robust climate action that we so desperately need at this time.”

Anne Marie Harrington of Futureproof Clare said: “In Clare, Trump’s environmental decisions are very local problems. We are the county that is most vulnerable to the storms and flooding of climate breakdown, while Shannon LNG, a terminal for US fracked gas, may be built in our Shannon Estuary. We don’t want our home to be transit point for this climate-wrecking fossil fuel. This visit is an opportunity to voice our opposition.”

Organisers point out that the protest is not just against Trump and US policy, it is also against the Irish Government’s breaching of Irish neutrality by allowing the US military to use Shannon.