The funeral of a popular retired parish priest, who famously said he had saved a place in heaven for U.S. President Donald Trump, will take place in Co Clare tomorrow.

Fr Joe Haugh, who served as a priest in the Diocese of Killaloe for 63 years, died yesterday at Regina House nursing home in Kilrush. He was 87 years old.

This afternoon, hundreds of people turned out on the roadside across the parish of Doonbeg/Killard in West Clare to pay their last respects as they were unable to attend the church because of strict health guidelines.

Instead, parishioners were requested to stand outside their homes, while maintaining social distancing advice, as the funeral cortege travelled for almost two hours around the area. The hearse was met at every turn, junction and crossroad by parishioners who had braved sometimes inclement weather to bid farewell to Fr Joe.

The cortege returned to Doonbeg where Fr Haugh’s remains were received at the local Church where he had served as parish priest between 1995 and 2008 and where he continued to minister until last year. The reception service was streamed live on the Doonbeg parish Facebook page.

Last year, Fr Haugh revealed how Donald Trump, before he became president, had asked him “get me to heaven.”

Fr Haugh had met Mr Trump’s resort in Doonbeg in 2014. “When we were leaving he said to me ‘get me to heaven’.” Fr Haugh told local newspaper The Clare Echo when asked if he thought Donald Trump would in fact ‘get to heaven’, “I certainly do, he loves his neighbour, he’s done a lot for his neighbour”. 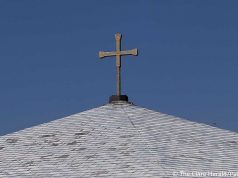 Football is the religion in Doonbeg