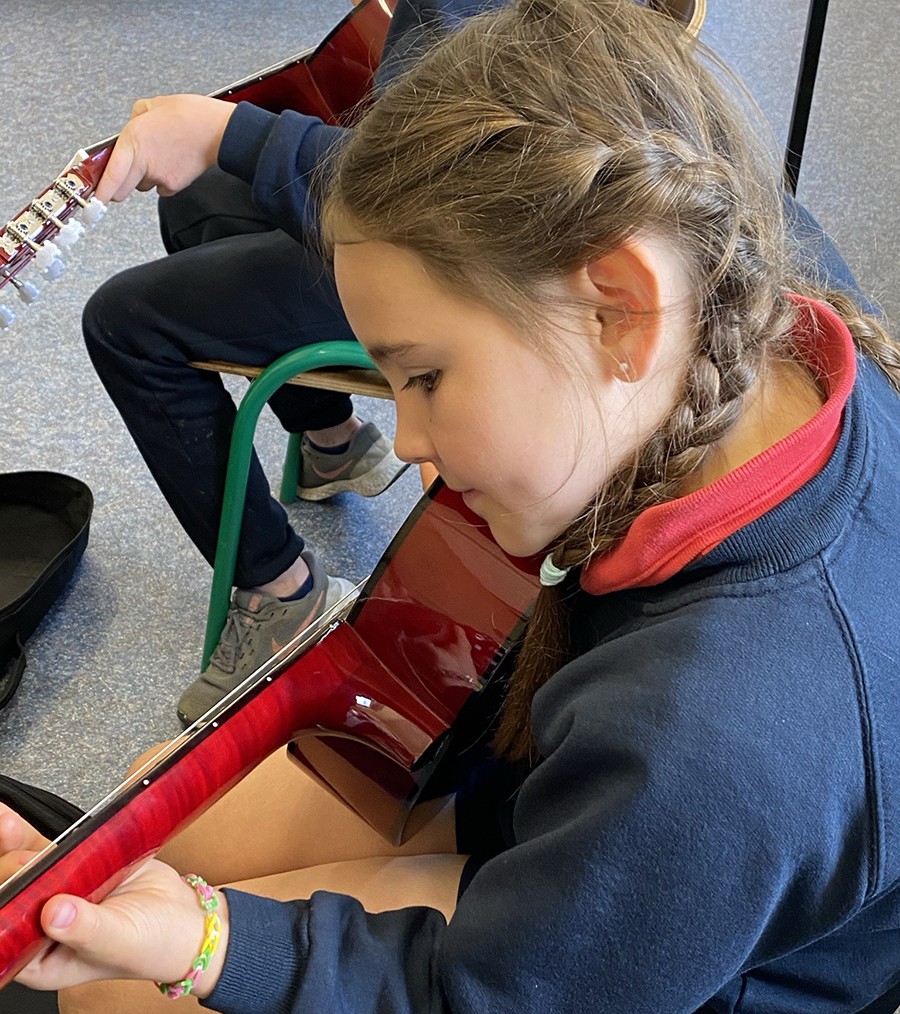 When the children in Scoil Cholmcille Clouna could no longer learn the guitar in person at the school due to Covid-19 restrictions, they wanted to give the children the opportunity to continue to learn music over the lockdown, a time when they could use the creativity and music the most.

Their guitar teacher, local musician Chris Wood, was familiar with teaching over Zoom and was happy to transfer the classes online so that the children could continue with their guitar tuition. Take up was as strong as ever and Chris approached the school to suggest a performing and recording project. He was writing an original piece for the guitar and invited the pupils to take part remotely. Principal, Éadaoin Ryan said, “we jumped at the chance to give the children the opportunity to take part in such a unique and creative project.”

Influenced by a recent singing project, where they got people to record themselves singing on their phones and emailed to them, Ennistymon musician, Chris Wood, came up with the idea to write a piece of music that the pupils of Scoil Cholmcille Clouna could learn and record parts for at home over the lockdown, which he would later put together at home on his computer.

“A piece of music can be made up of many simple parts, and so it seemed a perfect idea for these students at the school, who were mostly beginner guitarists. I wrote parts for them, and also for some of them who had more experience with the guitar”, he said. It gave the children the opportunity to learn a simple piece of music at their own level and to work on it until them could play it well enough for them to record it. It also enabled them to be part of a ‘big sounding’ piece of music without the need to learn the entire piece. 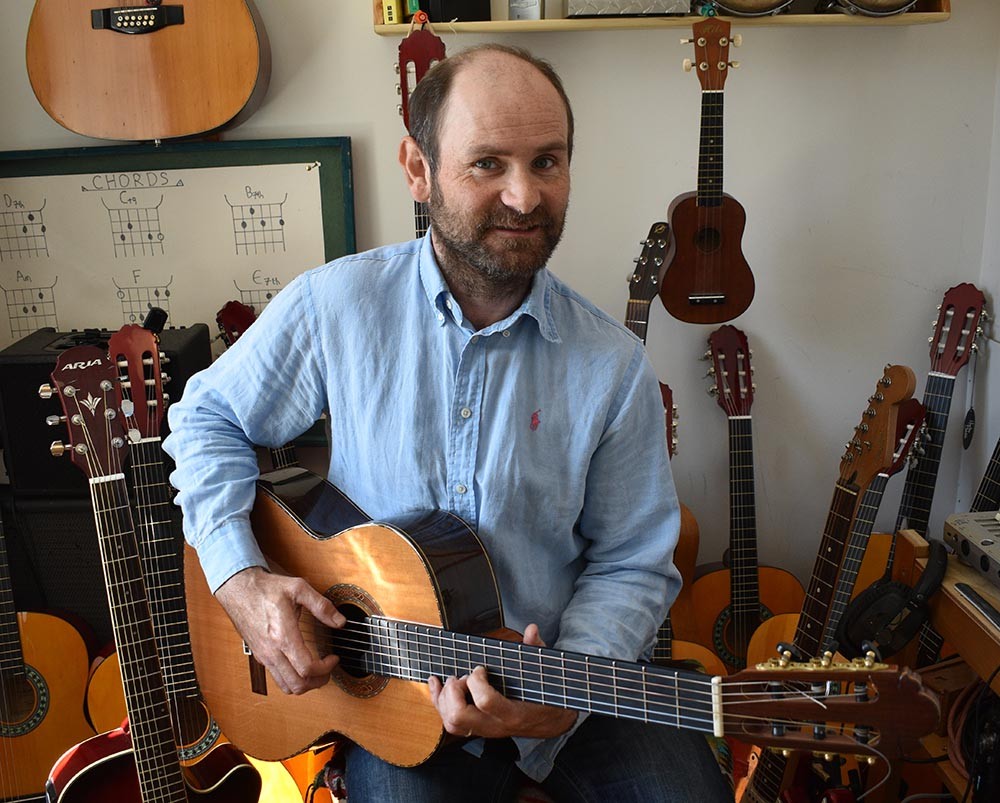 Chris was influenced by the different characters of the pupils he was teaching at the North Clare primary school and this led him to include other sounds they could make with a guitar or with their voices e.g. drumming, clicks and laughter. “Sounds of the Playground” has over 21 different parts for guitar, hands and voice. It features 15 guitarists, aged from 8yrs to 12yrs from Scoil Cholmcille Clouna. It was created between March and May 2021 during Covid restrictions and recordings were made mostly at home by individual students.

The project kept him in touch with the children outside the weekly guitar lessons and helped him still feel engaged as a music teacher. Chris also felt it gave him, “an opportunity to be creative with what was a fairly new and unique idea.” The project also gave the children something to focus on over lockdown and for the future.  “The children were given the opportunity to literally play their part in the bigger picture of a finished piece of music”. Chris added, “It was a little bit of an experiment. The results have been fantastic.”

Some of the pupils found the overall process difficult, but from seeing others playing their parts, when in-school lessons resumed, and with some encouragement, they overcame these difficulties and were able to learn their parts and get them recorded. “I think this led to a very good sense of achievement for them”, Chris explained. “It has been a learning experience for me, too, in how to communicate music remotely, and how to organise 15 different players to take part in the same piece.”

The completed piece of music was showcased in the school by setting it to a video montage of the pupils playing guitar during their music lessons. The reaction from the children was of sheer joy and excitement of finally hearing all of their practice and playing coming to life. 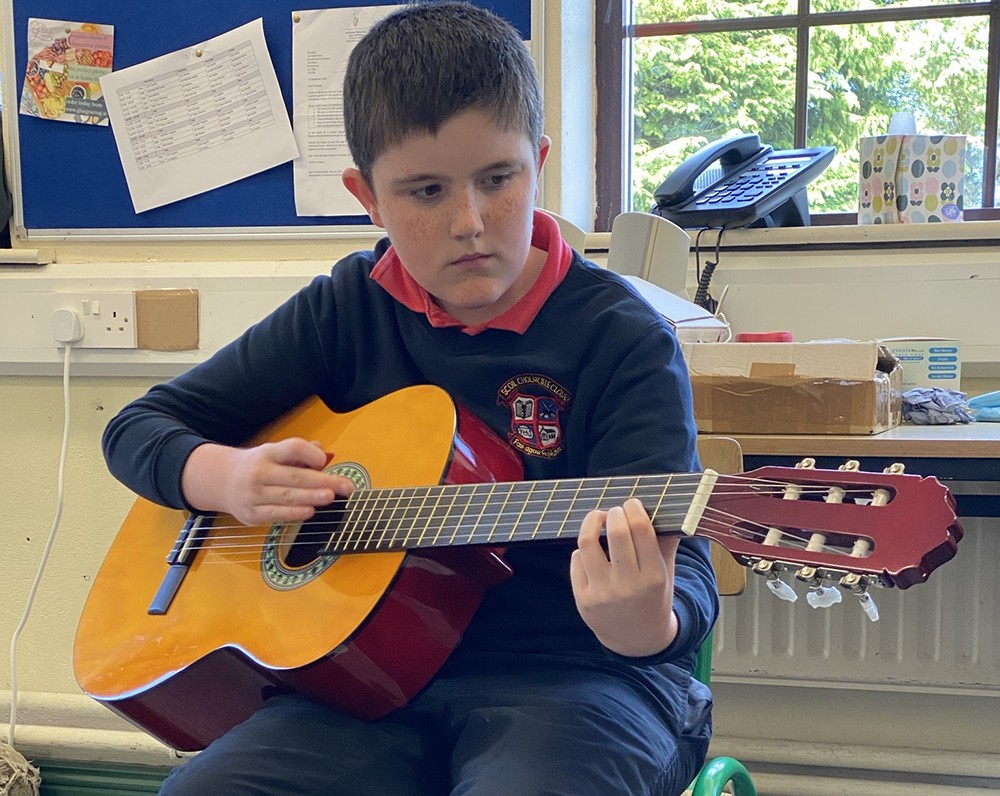 Second Class student, Sam O’Dwyer (8) said he found it tricky to learn most of the pieces but in the end he got most of them right and he enjoyed it a lot. Liam Carmody (10), Fourth Class, said he really enjoyed this project because they had to put their time into it and concentrate on it. He said it was really fun learning the parts and doing it all. Third class student, Robert Shanahan (9), said it was great fun learning the pieces and that he enjoyed doing it with other people. He said that one of his favourite parts was the solos and it was great fun watching the video with all his friends.

He said that it was a great time consumer for lockdown and thanked Chris for putting all the pieces together and letting them do the project. Saibh McCullough (9), Third Class, said that she liked doing the guitar because she liked learning something new everyday. She said it felt really cool seeing herself on the video and she was very proud of herself and can’t wait for her mum and dad to see it. Éabha O’Loughlin (9) Third Class, said she liked creating rhythm with her fingers and her body and listening to the video with the guitar. She described the project as really fun.

The recording for Sounds of a Playground will be released to the community during Scoil Cholmcille Clouna’s Creative School’s Week which will take place from 8th to 12th June in the run up to Cruinniú na nÓg. 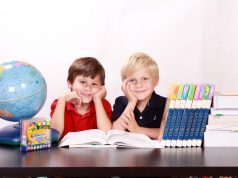