The Burren Ecotourism Network is to launch a ‘Solar Meitheal’ in 2023 to help its members reduce their energy costs by joining together to operate as an energy community.

The groups’ decision to create the Meitheal, follows a presentation by Colm Garvey from the Clare Community Energy Agency’ (CCEA) who will be advising members on their application for the Government’s Solar Photovoltaic (PV) scheme. Mr Garvey was recently named as one of the Irish Times’ top 50 people to watch in 2023.

Mr Garvey said: “A group scheme would benefit members in many ways, helping them get the best technical advice to ensure the system meets their needs and ensure that the group receives a fair price.”

He continued” “I’ve assisted 150 homes in Clare over the last 18 months and it’s interesting that the most important benefit that people mention is having someone with them to advise at each step. Typically, we get 5% less than going market rates.”

The PV scheme provides grants of up to €2,400 to businesses, public organisations and community groups that want to put solar panels on their premises. Up to 6kWp of solar panels, equivalent to about 16 panels, can be grant funded under the scheme.  It is estimated by those organising the scheme that businesses could save up to €3,000 a year by using a solar PV system. In addition, the Government has announced a tariff that will be paid to those exporting power to the grid from their panels. Applicants are required to have received a grant offer from SEAI before proceeding with any works.

Jarlath O’Dwyer, CEO of the Burren Ecotourism Network said: “Many businesses in the network have been looking at ways to reduce their reliance on expensive energy sources and been switching to greener and more affordable alternatives. There has been a strong interest in solar energy amongst our members, with businesses such as such as ‘The Lodges at Seaview House’ and the’ Ritz Hotel, Lisdoonvarna’ already using solar panels to reduce energy costs.

Practically the CCEA will guide businesses through the application process and assist each of them as to what to install, and follow through until the grant is paid.

“The Solar Meitheal means that the businesses would have advice on what systems would suit their business best, how to avail of Grant Aid for installations, and that they would have better buying power when operating as an energy community,” Mr O’Dwyer continued.

One business that has already benefitted from a Solar Meitheal is the Doolin self-catering business, ‘The Lodges At Seaview house.’

Niall Hughes, owner said. “We participated in the Solar Meitheal in 2021 and installed a solar PV system that summer. Working with the group allowed us to make quick decisions based on the groups knowledge we were also able us to receive the best value for money.  We use solar energy to run our hot tubs and to provide electricity and hot water to our Lodges.

Also on the journey to solar energy is the four-star Gregans Castle hotel who recently completed the installation of a solar system which will be live by mid-January. 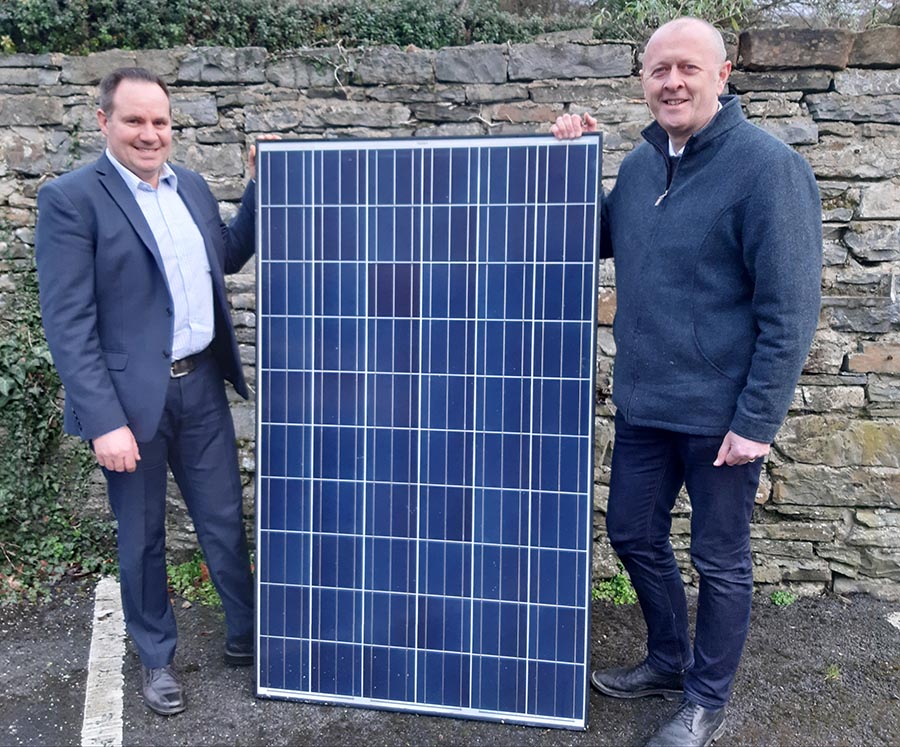 Simon Haden, Owner of Gregans Castle Hotel said: “We started looking at the Solar PV project a year ago before energy prices went up. In late April our 2-year contract with Airtricity was up for renewal and our prices increased 2½ times.  We have used Airtricity since 2000 and yes that is wind generated electricity but if we reduce our consumption not only will we be saving money, but we will be freeing up more green energy for other consumers to buy.

Mr Haden continued: “It is projected to generate 32% of our daytime electricity (9am to midnight). Our daytime usage is 92% of our total so that’s very significant.  Overall, this is a complete no brainer. This is free energy and obviously when we or other tourism business energy use is at its highest (in the summer months) it will generate the most energy.”