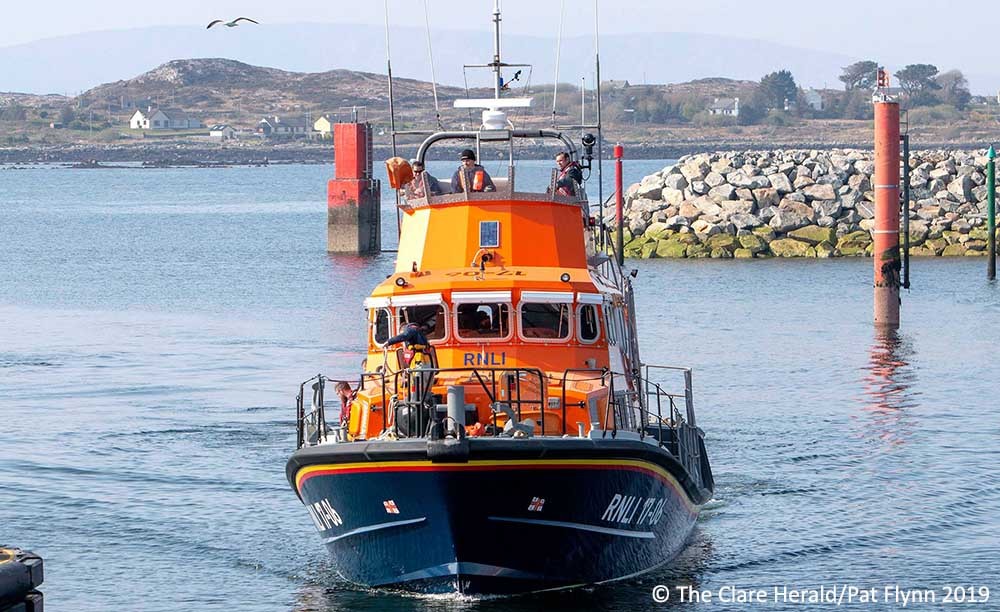 A small boat with two fishermen on board has been towed to safety after getting into difficulty off Co Clare this afternoon.

The alarm was raised at around 3.30pm when the two-person crew of the half-deck boat suffered technical problems south of Hags Head in Liscannor Bay.

The Shannon-based Irish Coast Guard helicopter, Rescue 115, was requested to make its way to the area and investigate the problem.

In the meantime, the Aran Islands RNLI lifeboat was also requested to proceed to the scene from its base on Inis Mór. The lifeboat was requested because the Doolin unit of the Irish Coast Guard is currently ‘off the board’ and not permitted to respond to any water or land-based emergencies.

The volunteer RNLI crew reached the scene at around 5.15pm and soon towed the casualty vessel into the safety of Liscannor Harbour.

Speaking after the call out, Aran Islands RNLI Coxswain John O’Donnell said: “The Volunteer Crew didn’t hesitate to answer the call and we were able to get the fishermen back to the Harbour before night.

We would remind anyone going to sea to always wear a lifejacket and always carry means of communication. Should you get into difficulty or see someone else in trouble, dial 999 or 112 and ask for the Coast Guard”.

It was the second call in the area since the Doolin unit of the Irish Coast Guard was taken out of service at the beginning of the month. The Doolin unit was stood down on November 1st after six volunteers resigned.

In the meantime, while a mediator has been appointed to try and resolve the issues in Doolin, a number of other search and rescue (SAR) stakeholders in the area have been requested to provide cover for services that otherwise would be provided by the Doolin unit.