The Clare T.D. told the Dáil that the post Brexit departure from the Irish market by British insurers has compounded the difficulties already posed by rising insurance costs and left the organisers unable to secure the necessary insurance to proceed with Ireland’s oldest horse fair held on the 23rd of June, as recalled by the song which has added to its fame.

In response, Minister of State at the Department of Finance Séan Fleming has proposed that he and Deputy McNamara make an approach to Insurance Ireland and Brokers Ireland about securing insurance for the event.

“Spancilhill is an important cultural institution in Ireland having recently been included in Ireland’s National Inventory of Intangible Cultural Heritage, explained Deputy McNamara.

He continued, “Like much of our intangible cultural heritage, it is not only intangible but is endangered and will not be around for much longer unless the Government takes action to protect it because it cannot now get insurance. Insurance is a significant obstacle for any event and occupiers’ liability is an issue for every organisation in the country.”

“The fair at Spancilhill is iconic, but there are other community groups organising various festivals and events this summer, having been in abeyance for two years, and they may not be able to get insurance. I hope the Minister of State has some succour to offer,” stated Deputy McNamara. 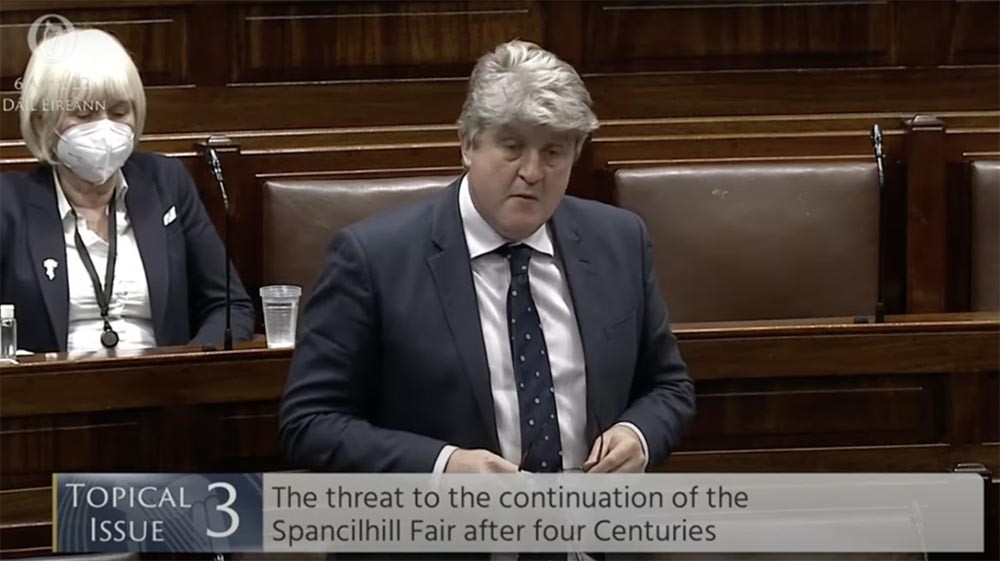 Minister of State Fleming responded, “On a related industry, point-to-point pony clubs and hunts could not get insurance last Christmas. We got that matter sorted, again by a large group of hunts, pony clubs and point-to-point races coming together. Collectively, through two different brokers, they increased competition and got insurance. There is scope to do that here, although I am not making any commitment whatever.”

“I ask the Deputy to contact my office and we will talk to Insurance Ireland and Brokers Ireland to see if they can help. I stress again that this a market issue. We will not have a role but if we can point people in a helpful direction, we will be happy to do so”, added the Minister of State.

A charter for the historic Spancilhill Fair was granted by King Charles in 1621.  The event did not take place in 2020 and 2021 due to the pandemic.